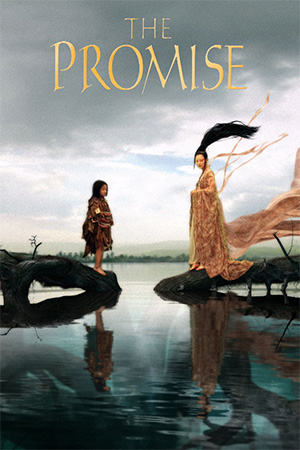 China’s official entry at the Oscars features an international cast,  a healthy dose of CGI action and unique direction from master film maker, Chen Kaige. It is also, however, devoid of heart, soul and any sense of coherence. You won’t see a more frustrating film in 2006.

No doubt bolstered by the international success of previous hits ‘Hero’, ‘House of Flying Daggers’ and the seminal ‘Crouching Tiger, Hidden Dragon’, Chen Kaige has amassed a startling cast and crew and a none to modest budget to tell the tale of rugged slave Kunlun (Korea’s Jang Dong Gun) and his hidden love for the beautiful Qingcheng (Cecilia Cheung). With stellar support from Japan’s Hiroyuki Sanada as General Gaungming and cinematography by the excellent Peter Pau (‘Crouching Tiger, Hidden Dragon’, ‘The Touch’) you’d be forgiven for thinking that ‘The Promise’ will be an obvious hit. It is not.

We open on a dishevelled young Qingcheng (Guan Xiaotong) stealing bread from a dead man’s corpse after a bloody battle. Fleeing through the dead bodies that litter the ground, she is stopped in her tracks by a young boy who manages to trap her with a rope and a tree. He tells her that the dead bodies were that of his fathers army, and that should she steal from them, she’d be stealing from him too. Young Qingcheng is crafty however, and offers him her services as a slave if he would let her go. “Do you promise?” comes the young boys response. She does, and he releases the trap. Poor boy. He is swiftly knocked to the floor and Qingcheng steals back the bread and runs away. So a chain of events is set in motion which will have profound effects on everyone who meets her.

Flash forward 15 years and a general named Gaungming (Hiroyuki Sanada), a Master of the Crimson Armour, is about to lead his men to another great victory with the help of hundreds of slaves. The slaves are forced towards the approaching army by way of a narrow valley, and given more incentive by having a herd of stampeding bulls chase them. One such slave is Kunlun, who, upon seeing many of his comrades crushed to death, displays a talent which will become integral to the rest of the story. He’s really, really fast. Running seems to be an art to him. Before you can say ‘Forest Gump’ he is carrying a wounded comrade on his back and running so fast that he leaves the herd and the approaching army in a cloud of dust. General Gaungming sees this incredible deed but doesn’t dwell long on it as he has work to do. The ensuing battle is huge as he leads his men against 3000 soldiers. He makes fast work of the opposition and defeats nearly 200 soldiers himself with only the aid of his ‘Great Golden Balls of Doom’. Or something to that effect.

After the battle is won, Gaungming asks Kunlun to be his personal slave and Kunlun is happy to oblige, as doing this means that he will get to eat every day which is not a certainty in his current life. Later that day, in a dark forest, a vision appears before Gaungming which tells him that the Master Of The Crimson Armour will kill the king and capture the heart of his Princess Qingcheng. Upon hearing this prophecy he spies an opportunity for power. Unluckily though, before he can act on this newfound knowledge he is wounded in a fight with a mysterious assassin. Unable to go any further he comes up with an obvious plan. His loyal slave Kunlun should wear the crimson armour and it’s golden mask, and kill the king in his place. Genius. (Yawn) With the mask and armour hiding his true identity he sets off to the palace to do his masters biding and makes quick work of the King, who was already under siege from another enemy, Wuhaun. (Nicholas Tse) Wuhaun also happens to be in love with the Princess. As Kunlun tries to escape with the Princess they run into trouble and are separated as they are attacked by Wuhaun’s soldiers, who then take the Princess back to be their masters lover. It is too late for love to blossom there though, as a seed has been planted in her heart. Qincnheng is in love with her rescuer, The Master Of The Crimson Armour.

Cue: mistaken identity, melodrama, three way romance, more CGI, swordplay, varying levels of acting and, oh, more CGI. The said effects are one of, but not the only thing that is to the films detriment. So uneven are they in their execution that they will likely induce fits of laughter from many of the audience. Stunning vistas, buildings, weapons and in the case of the bull stampede sequence – entire scenes, are all completely created with CGI. Kunlun’s sprinting effect is similar to that of the roadrunner chase in Stephen Chow’s ‘Kung Fu Hustle’ (which in fact was created by the same effects house, Centro) only far bigger and ‘way’ more over the top.

It works fine in Mr. Chow’s movie because it’s supposed to be a slapstick-comedy moment, but when you drop something like that into a serious, semi-art-house period film, it just pulls you out of the story. The same goes for a sequence a little later when Kunlun’s friend Snow Wolf (Likeably portrayed by Liu Ye) teaches him how to run so fast that you can travel back in time. I mean, excuse me? Both in idea and execution, that little plot device belongs in an entirely different film. It is elements like this which do not help lend an air of credibility to the previously mentioned, over complicated plot. I have never seen so many effects in an Asian film before and the slapdash execution displayed here, makes me hope I never will again.

In the acting department the usually excellent Jang Dong Gun just about gains our sympathy as the slightly slow and gullible Kunlun. See what they did there? He’s mentally slow but physically fast. Something else better suited to a Stephen Chow movie. He certainly doesn’t stretch himself here, though who can blame him when, for over half of the movie you can’t even see him whizzing around inside the clunky effects. Hiroyuki Sanada probably holds the screen best, even when his character acts in a most unlike-able way for much of the films running time. He’s always believable and seems to handle his dialogue and action scenes like a true professional. The biggest problem lies with the talented and beautiful Cecilia Cheung. Painted in white and frosty in nearly every scene, it’s difficult to see where the film makers had hoped to inspire sympathy for Qincheng in the audience. Don’t get me wrong, Ms Cheung has always been one of the better Hong Kong actresses for my money and she emotes admirably here. It’s simply that her character seems one dimensional and cold. So maybe the problem lies in the script from Zhang Tan and Chen Kaige?

Director of such highly regarded films as ‘Farewell My Concubine’, ‘The Promise’ was something of a departure for Chen Kaige, who, much like Zhang Yimou before him (who went from art house films like ‘The Road Home’ and ‘Not One Less’ to critical success with ‘Hero’) is new to the period fantasy genre. Having written and directed the excellent ‘The Emperor and The Assassin’  however, there was no real reason to doubt his skill in depicting a different kind of period film. Sadly though, pretty much everything in ‘The Promise’s script falls flat. Characters come and go with little or no real reason. Events simply ‘happen’ because the script dictates, not because you believe the characters would act in such a way. It’s this disregard for rhyme or reason which undermines any of the good work on the film. There is never a point in ‘The Promise’ where you feel that we, the audience, are not supposed to take this all seriously. Sadly, with blatantly 1-dimensional characters and semi-realised special effects being thrust under our noses every few minutes it’s hard not to wonder if ‘The Promise’ ‘is’ actually a ‘wink at the audience comedy’ in the vein of ‘A Chinese Odyssey 2002’.

So the bad far outstrips the good. Yes, the sets are stunning, costumes sumptuous and the actors are beautiful. The cinematography can sometimes inspire and while it is all of the CGI/wire trickery nature, even the action can excite. But when you feel no emotional connection to anything happening onscreen the efforts of the behind the scenes folk seem wasted. I really expected more from such a talented cast and crew but at the end of the day I do understand that ‘The Promise’ is a largely experimental film. It’s just a shame that it was such a spectacular failure. It will lose most of it’s audience by the 20 minute mark and even those that do manage to stay engaged past that point will likely be sleeping by the time our heroes ‘Fly away into the sunset’.