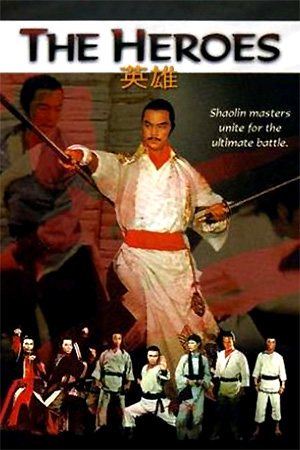 Marshall Kao (Ti Lung), former Shaolin fighter now turned Manchu enforcer, is given the task of tracking down all of the remaining members of his former brethren. The traitor manages to capture famed anti-Ching warrior Si Ying (Tan Tao Liang) and drag him and all of his fellow rebels to a fearsome Manchu stronghold for questioning. Although the Emperor is keen for the opposers to be executed, Kao persuades his superior to allow him to torture the Shaolin fighters in the hope of turning them to the Ching cause. There is more to the tortures than meets the eye, though, and the prisoners seem to be resisting the regime rather too well. It begins to dawn on the Emperor that perhaps his ally, Kao, is far from opposing the Shaolin cause – in fact, he may be secretly aiding it.

Despite obviously not benefiting from the budget of the Shaw Brothers’ productions, Wu Ma’s ambitious ‘The Heroes’ is a worthy kung fu drama that is impressive enough to stand out from the overcrowded independent market. Central to the film’s success is a flawless lead performance from Ti Lung that is proof, if proof were needed, that many of the genre’s biggest stars could actually act. During his time at Shaw Brothers, Ti Lung demonstrated his thespian qualities alongside his physical skills and rose to prominence within the actors’ stable. While some of Ti Lung’s independent appearances were hardly demanding, ‘The Heroes’ presents the star with a powerful vehicle that is much more than just a mindless action film. The emotions that Marshall Kao is forced to go throw as he plays the traitor are painfully realised and create a central dynamic within the film that gives it an overall resonance that is not always seen in the genre.

With a remarkable effort by Ti Lung, it is natural that the benefits trickle down to the rest of the cast. Tan Tao Liang – though hardly stretched – is good as the heroic Si Ying while a young Danny Lee is effective as the naive and deluded avenger determined to kill Kao. The only disappointment in the acting department is Shih Szu; it’s a shame that such a talented actress is given a somewhat unimportant role and is therefore resigned to floating in and out of the film with little meaning. ‘The Heroes’ though has enough substance to make sure that the weaknesses and relatively small budget are barely called to mind.

For anyone who wants a change from the late-70s kung fu comedy cycle, ‘The Heroes’ is a film that is heartily recommended. Director Wu Ma – sadly unappreciated in this area of his career – forms a dramatic piece that has a power and depth that should really be commended; the closing few minutes have a lingering effect that will stay with many viewers long after the credits have rolled. Although I have mainly noted the dramatic qualities of the production, ‘The Heroes’ has enough well-choreographed fight sequences to impress though Wu Ma’s edict is quality rather than quantity. An excellent film in every department and a certain recommendation.