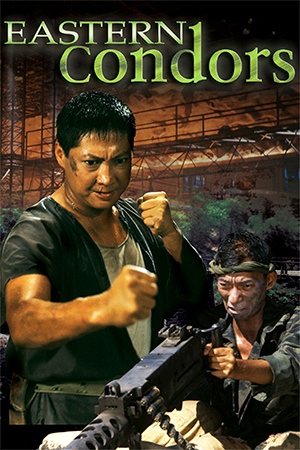 One of the few war movies to be made in Hong Kong, ‘Eastern Condors’ is the story of a group of convicts sentenced to life imprisonment.  They are offered a way out however, in the form of a suicide mission which involves parachuting behind enemy lines in Vietnam to destroy a munitions dump.  Once they arrive though, they soon discover that they aren’t the only ones looking for the dump and they come face-to-face with an evil tyrant (Yuen Wah) and his army.  Now it’s up to Sammo and his team to fight for their lives and find a way back home.

Drawing inspiration from the likes of ‘The Wild Geese’ and ‘The Dirty Dozen’, ‘Eastern Condors’ is an extremely impressive Asian incarnation of a war movie. From the moment the prisoners parachute behind enemy lines, the tension never lets up and the film hurtles along at breakneck speed with one exciting action set piece after another. The cast, which reads like a who’s who of Hong Kong cinema, is brilliantly assembled and all involved manage to do a memorable job with their respective roles. It’s also worth noting that there are a few typically Hong Kong moments of humour, but long-time fans of the industry will no doubt appreciate these hints of levity.

Like the majority of 1980’s Sammo Hung movies, ‘Eastern Condors’ also boasts an abundance of outstanding action. While every scene has its own merit, the real stand-out moment is undoubtedly the film’s finale. Featuring three of the infamous Seven Little Fortunes, Sammo Hung, Yuen Biao and Yuen Wah, the sequence is one of the most exciting and expertly choreographed final fights that you are ever likely to see. In a similar vein to ‘Dragons Forever’, each of the heroic combatants is given an equal opponent and it’s great to see how they figure out an exploitable weakness. Fan favourite Yuen Biao is deserving of a special mention, as his use of eye catching flips and kicks is particularly impressive.

‘Eastern Condors’ is a mind blowing mix of kung fu and wartime combat that will have you hooked from start to finish. Hung truly gets the best out of everyone involved and the intricately choreographed fight scenes will have you reaching for the rewind button time and time again.