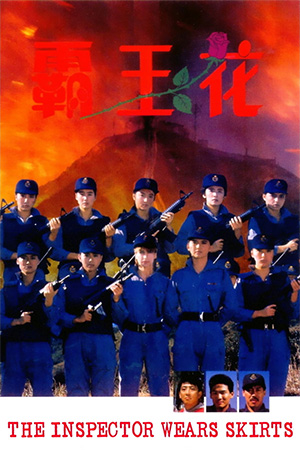 Jackie Chan produced this enjoyable 90 minute mixture of a female Police Academy film and Hong Kong action. The film opens up with a showcase for Sibelle Hu’s limited yet adequate fighting skills as she takes on numerous assailants in and around a familiar set (familiar as it’s the set that was used for ‘Project A Part 2′). With the eponymous Inspector introduced, she is then given a group of raw recruits to train as female commandos and give them the benefit of their expertise. Conflict comes in the shape of their rivals, the all-male Tiger Group who are trained in the same camp by a male instructor. The bulk of the film therefore focuses on the romantic entanglements between the two groups and the comedic situations they all find themselves in. However, the film’s final twenty minutes concentrates on the now fully trained female commandos’ first assignment: the protection of a host of valuables at an exclusive party. When a group of robbers infiltrate the party, it’s time for all of the training to be finally put into action.

It’s fair to say that this film is really more of a comedy than the kind of action-packed femme-fatale flicks that star Moon Lee et al. Although it’s not a laugh a minute showcase, it does feature some watchable routines and it is certainly good to see stars such as Sandra Ng and Anne Bridgewater in early roles. Some of the comedy is surprisingly cruel and therefore tends to alienate the audience; look out for Sandra Ng’s treatment for proof of this! There is though some good action that concludes the film and, while it may not be classic 80’s Hong Kong cinema, it passes the time quite nicely.