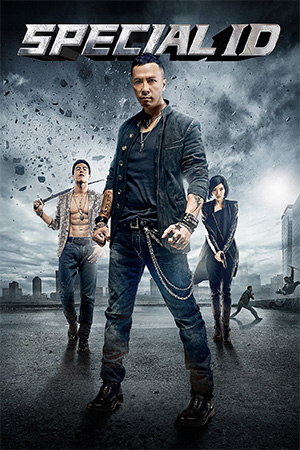 After a surge of period and fantasy styled films, Donnie Yen returns to modern day cop action territory in the somewhat schlocky but no less entertaining ‘Special ID’. With various trailers promising a Yen action blowout with various MMA influenced confrontations, ‘Special ID’ certainly delivers on that front and while it can’t quite maintain the magic and momentum in the non-action scenes this is still a welcome return for the man Yen to the modern set action film. He plays tough undercover cop Chan Chi-Lung who has been in deep cover in Cheung Mo-Hung’s (Chou) triad gang for some time now. When Lung’s negotiations with three other local triad gangs goes spectacularly wrong, Hung becomes suspicious of undercover agents within his ranks and vows to wipe out any traitors. Fearing for his own life, Lung requests to taken off undercover duty and reinstated for normal cop duty. However, his captain has one last mission for him before this can happen: to infiltrate the gang of one of Hung’s best lieutenants and bring him down. Said lieutenant is Sunny (On), a vicious criminal out to make a name for himself and who has ties to Lung from their past. Fearing his identity may be blown, Lung fights to stay ahead and bring down the criminal gang and keep himself alive.

While it may not reach the same acclaimed heights of Yen’s previous modern actioners ‘SPL’ and (the somewhat underrated) ‘Flashpoint’, ‘Special ID’ is still a well made action thriller that is nowhere near as bad as some of the online opinion may have you believe. The narrative, refreshingly, is relatively un-convoluted and while it rarely surprises it shuttles along at a brisk pace as Lung rockets from one confrontation to the next. There is a rather clumsy subplot involving Yen and his mother which while it serves to add some touching scenes in amongst all the violence and double crossing does leave with viewer with the odd feeling of why is this bad-ass character, capable of kicking the crap of several bad guys at once, calling his mum for advice! However, the lovely Jing Tian (‘Police Story 2013’) fares much better as the local cop Lung reports too, and while her and Yen’s scenes perhaps feature too much mugging for a bit of comedy relief, they do share good chemistry and it would have been nice to see their relationship developed a bit further.

But then this would have got in the way of all the knuckle dusting action, of which Jing Tian even gets in on. And, as is to be expected from Yen and his team, the action and fights in ‘Special ID’ are fantastic. Yes, Yen and Chou may not go toe-to-toe this time around (but I think it would be pretty much impossible to top their epic duel from ‘Flashpoint’) but Yen gets to mix it up with the likes of Ken Lo (‘Drunken Master 2’) and Andy On (replacing the controversial exit of Vincent Zhao). The fights are well paced throughout the runtime each building to the epic showdown between On and Yen and are packed with MMA style grappling and take downs giving them a much more brutal and grounded feel. On is also on fine villain form, adding some much needed tension whenever he is on screen as the slightly-on-the-edge-of-sanity Sunny. Stunt maestro Bruce Law is also on hand to co-ordinate an exhilarating car chase and if anything ‘Special ID’ should be applauded for is its reliance on real stunts, excellent fight choreography and a distinct lack of CGI.

While it may not quite be the ultra hard hitting cop action we were all expecting (it does lack tension in-between the non fight bits), suffered from a troubled production and dips into cheesiness all too often, ‘Special ID’ is still a lot better than you’ve probably heard and a welcome return to the kind of 90s style crazy cops-and-criminals action fun.