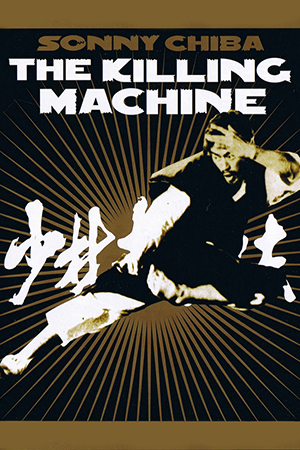 After acting as a secret agent for many years, Mr. Soh (Chiba) suddenly finds his world turned upside down when the Japanese army surrender and the war comes to a close. Thrown back into a society where the poor get poorer and the corrupt get richer, Soh struggles to re-adapt and is infuriated by the government’s treatment of the common man. Unfortunately, the only way Soh knows how to deal with criminals is to use his fists and he soon finds himself in trouble with the law. Forced to flee his hometown, Soh opts to open a small martial arts school in one of the suburbs but when the the criminals start to spread and move into town, Soh’s blood begins to boil.

‘The Killing Machine’ is a surprisingly dramatic take on the kung fu genre that is loosely based on the life of Dohsin So, founder of the art of Shorinji Kenpo. Set just after the Second World War, the film displays an intriguingly progressive narrative that opens with one soldier’s struggle to re-adapt to a bleak society but closes with him finding solidarity in the martial arts. By doing this, the film draws several thematic comparisons with the likes of ‘Fist Of Fury’ and ‘Legend Of A Fighter’, but also finds time to tug at the heartstrings with some tales of woe.  Another key component is the use of Sonny Chiba, who is not only a very dominant on-screen presence but is also an actor capable of going from an uncaged animal to a fatherly figure with uncanny ease.

The action scenes in ‘The Killing Machine’ are equally as adept as the story but thankfully never manage to overshadow it.  Chiba is unsurprisingly the main focus here and always looks like a true master as he demonstrates some very effective Karate based techniques. He also sensibly chooses to keep back his more acrobatic moves for the finale so the audience are able to walk away feeling that justice has truly been served. All of these sequences are very well shot, with just a small amount of slow motion inserted to highlight a couple of the more important fights. It is also worth noting that a few moments of gore do sneak in and although one particular scene is a little cringe-worthy (all of the men will be with me on this), it works well and is often fitting punishment for the truly evil bad guys.

‘The Killing Machine’ really has all the traits that make up a classic kung fu movie and it deserves to be seen by a wider audience. Whether you’re looking for a martial arts movie with a bit more depth or just want some top-notch action, this really does deliver on all levels and I heartily recommend it.