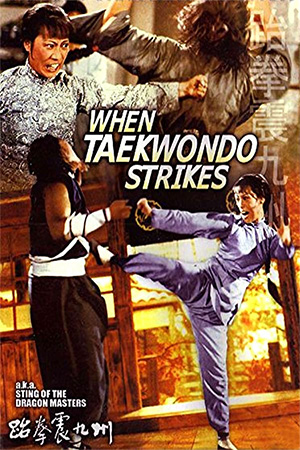 While watching ‘Come Drink With Me’ and appreciating Cheng Pei Pei’s obvious significance among Asian action actresses, it was natural that Angela Mao should also be mentioned in the same breath. As most Western viewers were mostly unaware of the original stars of the genre (i.e. Cheng Pei Pei, Chiao Chiao, Hsu Feng) initially due to the poor distribution of their films, Angela Mao had gained a sizeable cult following. ‘When Taekwondo Strikes’ was one of the films that established Mao’s on-screen persona and continues to delight her fans today.

After discovering a Korean patriot (Carter Wong) who refuses to bow to the invading authorities, a gang of tyrannical Japanese fighters corner him in a church and look set to kill him. However, the Western priest there steps in and, with the help of his Taekwondo fighter niece Mary, manages to force them out of the church. While the Japanese are re-grouping for another attack on the church, the priest’s Korean gardener reveals himself to be famed patriot Lee Chung Tung (Jhoon Rhee) who has been planning his next attack on the resident powers. Before the aggressors can return, the original Korean fugitive along with Lee Chung Tung and sympathiser Mary flee the scene and meet up with Chinese fighter Wan (Mao). The new team continue to evade the Japanese in the area until the priest who had aided in the past is captured and tortured for information. Knowing that he owes the priest a significant debt for saving his life, Lee decides to journey to the prison and free his loyal friend. The ensuing battle, though, sees Lee captured by the enemy and now in a similar position to the one he tried to save. Hearing of the dreadful outcome of the fight, the Korean patriots must now decide whether they should attempt to rescue Lee or continue the anti-Japanese movement elsewhere. Matters soon conspire to force them into the former option.

‘When Taekwondo Strikes’ doesn’t exactly boast the most original storyline; the Japanese aggression plot is again used though it is at least set mostly in Korea for a change. The actual progression of events isn’t that unique either – even in 1973 this very straight-forward direction would have been fairly routine. Nonetheless the film provides superior entertainment value due to the admirable merits that director Huang Feng does manage to provide. Foremost in this category is the wondrous Angela Mao; though not the main star of the film, she dominates every scene she’s in, particularly the relentless finale. Her fighting skills are combined with a strong sense of femininity, clearly inspiring later stars like Michelle Yeoh and Moon Lee. Huang Feng also succeeds in teaming Mao with Western actress Anne Winton who is surprisingly powerful both in fighting ability and acting. Of course, the film also highlights the talents of real-life master Jhoon Rhee and stars-in-the-making Carter Wong and Sammo Hung (looking strangely like the oriental Meatloaf). The addition of these and a use of some above average action (considering the film’s age) means that ‘When Taekwondo Strikes’, while still falling foul of the prosaic nature of the narrative and its uninspiring characterisation, is thankfully lifted above the mundane.