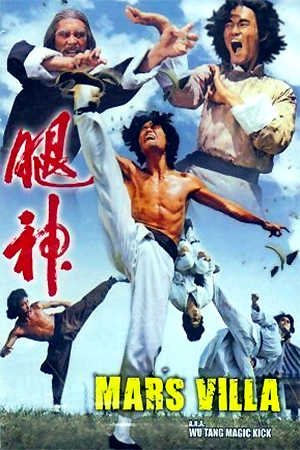 Mar Tien Liang (Liu) and his wife are two of the richest people in the local province thanks to several successful businesses they have built up.  Amongst these is a kung fu school in which Mar teaches his infamous Magic Kick that has given him notoriety throughout the land.  Sadly, success often breeds jealousy and he finds himself constantly hounded by challengers who are doubtful of his skills in the martial arts.  When one such challenge goes horribly wrong and Mar accidentally kills one of his opponents, the relatives of his victim come seeking revenge.  Vastly outnumbered, Mar and his wife are taken captive and Mar is driven to the brink of insanity by constant torture.  Will Mar be able recover his senses in time to save his wife from certain doom?

‘The Mar’s Villa’ is definitely what you would call a traditional kung fu movie. Featuring everything from martial arts school rivalry to training sequences to a revenge scenario, the film showcases a number of obvious clichés that can very easily make or break a movie in this genre.  Luckily, this particular outing proves to be a success, mainly thanks to a suitably captivating leading performance from John Liu and a plot that is handled in such a way that you genuinely care about the fate of our hero. Perhaps more importantly though, ‘The Mar’s Villa’ is absolutely overflowing with intricately choreographed fight sequences, all of which make great use of Liu’s breathtaking kicking skills.

While it may not be the most original entry into the genre, ‘The Mar’s Villa’ contains just the right mix of drama and intrigue interspersed with a number of enthralling action scenes. It also offers another chance to catch a glimpse of the mesmerising skills of one of the greatest kickers of all time – Mr. John Liu.