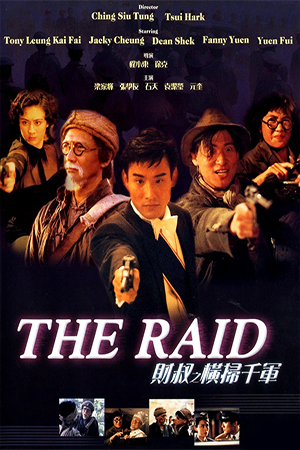 Uncle Choy (Shek) is a former hero who now harks back to past glories when he was a much younger and more sprightly figure. With Japanese forces taking control of China and the corrupt Manchurian powers in league with these aggressors, the time is ready for the rebels to fill the slot that Uncle Choy once proudly boasted i.e. that of a patriotic defender of the country. However, the old hero soon finds through a series of mishaps that his skills are still valuable and he sets off to stop the villains from building a chemical weapons factory in his beloved country. Alongside him is his trusty niece and a motley crew of people he meets on his journey; among these are a female rebel who has been undercover in the Manchurian den (Fennie Yuen) and a lively chancer who suddenly feels the patriotic urge (Cheung). Facing unlikely odds, the small band of rebels plans their assault on the enemy stronghold with Uncle Choy proudly at the forefront.

What will no doubt draw many viewers to this caper is the combination of two great Hong Kong directors and, while this work is certainly not among either of their best works, it is a pleasant surprise. In what could be described as a mixture of Indiana Jones and well-known Hong Kong film traits, ‘The Raid’ is a very entertaining 100 minutes of action/comedy. Dean Shek is mostly known for his over-the-top comedy roles, but here he plays things as a straight man and delivers a fine performance as Uncle Choy. The quality cast is of note, in particular Tony Leung Ka-Fai as the main villain of the picture and Joyce Godenzi in a non-fighting, but sizzling femme fatale role. The action is on a fairly big scale and while it isn’t the very cream of Hong Kong cinema, it is eye-catching and exciting. The film just makes it into the four star category as there are enough good moments to make up for the sometimes uneven pace of the narrative. Therefore, as long as you’re not expecting ‘A Chinese Ghost Story’ or ‘Peking Opera Blues’, this proves to be a recommended film.