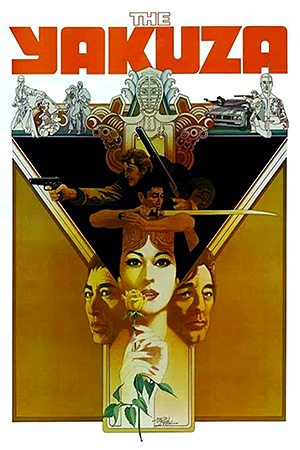 An overlooked gem from the 1970s, ‘The Yakuza’ is both a cracking thriller and a genuinely touching character piece. Featuring Robert Mitchum in one of his finest roles and showing Sydney Pollack used to be a dab hand at a good thriller, ‘The Yakuza’ is a fine piece of American filmmaking from its golden era and is infused with detailed and convincing Eastern style and setting.

Harry Kilmer (Mitchum) is a former private investigator who spent some considerable time in Japan during World War 2. When an old army buddy, Tanner (Keith) asks him to get his kidnapped daughter back from the Yakuza, Kilmer agrees and heads to Japan. He enlists the help of a former acquaintance Ken Tanaka (Takakura) whose sister, Eiko (Ishi) Harry saved from certain death during the war. Eiko and Harry have a history together but have been unable to be with one another due to reasons stemming from the war, the cultural divide between East and West and various other reasons stemming from the complicated relationship the three shares. After so many years, Harry attempts to reconnect with the two, enlisting Ken, a former Yakuza himself, to help him find the missing daughter. However, things a rarely as they seem and Harry, Eiko and Ken soon find themselves pushing their friendships, loyalties and sense of honour to the limits as they deal with double crosses and attempts on their lives.

An understated and riveting film, ‘The Yakuza’ is first and foremost about relationships, one’s sense of honour and trying to do the right thing in the most life threatening of situations. Pollack’s assured and non-flashy direction gets the most out of the cast and their characters, as they struggle with feelings and their senses of duty. The cast are exceptionally good, Mitchum on amazing form and perfectly backed up from the likes of Takakura and Ishi. The scene where Harry and Eiko meet for the first time in twenty years has to be one of the most genuinely touching and mercifully restrained scenes of two people, who are so obviously in love, having to keep their emotions in check. Beautiful and real it shows you don’t need schmaltz or intrusive music to make a scene touching. Likewise, the relationship between Harry and Ken and the bond of honour they form over the course of the film is handled with maturity and understatement, both actors never grandstanding but inhabiting their characters with a sense of realism that sets ‘The Yakuza’ above typical thriller fare. Not much fault can be found in the supporting cast either the likes of Richard Jordan, James Shigeta and Christina Koubo, who plays Eiko’s daughter, all playing their parts well and benefiting from the sharp and emotionally resonating script from Paul Schrader and Robert Towne.

In addition, the film is mainly set in Japan and Pollack creates a realistic setting and sense of culture, the theme of honour running throughout. An early Western film to deal with the subject of Yakuza, the film evokes the criminal underworld well and is respectful to the Japanese culture, the Western characters as much immersed and seduced by this foreign land as we the viewer are. While elegantly paced and respectfully favouring character over spectacle, ‘The Yakuza’ does feature some well mounted action scenes containing some startling violence that still holds up to day. The action is born out of the story and the situations and is worth the wait, executed with efficiency and brutal impact, showing the violent nature of the Yakuza world. The final confrontation is a riveting, well sustained showdown that releases the pent up emotion the characters have been carrying.

It may be a little slow and dated for some but one should do themselves a favour and discover this oft forgotten gem. Perfectly fusing Western and Eastern cultures and themes and managing a fine balance between emotion, character, story and action, ‘The Yakuza’ is a delight and shows that not all great films from the 70s are the ones you hear about all the time.