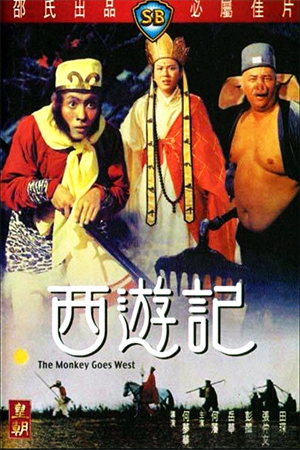 ‘The Monkey Goes West’ has to be one of the earliest film adaptations of Wu Cheng’en’s ‘Journey To The West’ and as such, takes a lot of its queues from the original stage productions.  This is evident in the inclusion of the occasional outburst of classical Chinese singing and some noticeably over rehearsed action but this doesn’t mean that this is a bad movie by any stretch of the imagination.

Monk Tang (Ho Fan) is a legendary holy man charged with the quest of retrieving the ancient Buddhist scriptures which are located in the West.  The journey ahead of him is fraught with many dangers which could halt him at every turn but luckily he encounters a couple of companions along the way that could prove helpful.  The first of these is Monkey (Hua), who was imprisoned within a mountain after he made a nuisance of himself up in heaven.  Tang instantly recognises the good within Monkey and decides to free him in the hope that he can turn over a new leaf.  Luckily, Monkey does indeed repay the Monk’s faith in him and chooses to join Tang and travel with him to the West.  As the two newly found friends continue on their path to righteousness, they come across the second member of their happy band who manifests himself as a Pig (Paang).  After a few simple tricks from Monkey, Pig also agrees to join their band and so it is written that the three travellers will join together in this sacred expedition.  Of course, there are still quite a few pitfalls along the way but with Monkey and Pig along for the ride, what could possibly go wrong?

For those of you with fond nostalgic memories of the television series ‘Monkey!’, you will know exactly what to expect from ‘The Monkey Goes West’.  If however, you are yet to see that classic small-screen gem then this is best described as a fun adventure packed with fascinating characters, lavish locations and some humorous special effects.  This could of course be said about any of the movie adaptations of this notorious book but what sets this one apart in particular are the superb leading actors and the obvious effort put into making it look as realistic as possible. Yueh Hua and Pang Pang as the infamous folk heroes are hugely enjoyable, capturing the essence of the original characters to near-perfection with the aid of minimal make-up.  Their outstanding performances are complemented by the luscious scenery and the well crafted sets that all help to maintain the required atmosphere.  Sadly though, the film does fall short of the four star mark, mainly because of the holes that exist within the story.  Even though the script writers have come up with several cleverly devised scenarios, they seem to have been devoid of ideas when it came to linking them together.  This has the effect of forcing the director to drag out certain scenes for far too long which makes them overly tedious when they really shouldn’t be.

Despite my last criticism, ‘The Monkey Goes West’ is still a fun little film that will appeal to all of the family.  The amusing antics of the Monkey king and Pigsy always seem to make for good movie material and I’m happy to report that this film is no exception.