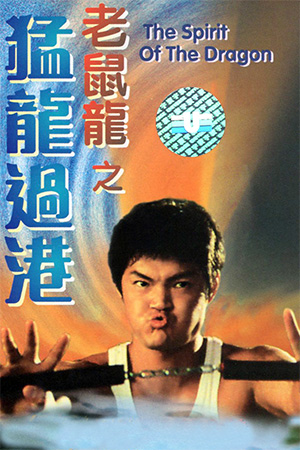 Michael Chow joined the ranks of Sammo Hung, Steven Chow and Johnny Yune when, in 1997, he paid comedic homage to Bruce Lee. Unfortunately this isn’t in ‘Enter The Fat Dragon’ or ‘Fist of Fury 91’ territory – this is firmly in the camp of ‘They Call Me Bruce’.

A buck-toothed country bumpkin arrives in Hong Kong to take over the family restaurant, but immediately finds himself interrupting a battle between two gangs. Barely escaping, the newcomer – charmingly called ‘Rat Face’ – vows the protect the restaurant in the future and calls on the power of his idol, Bruce Lee, to achieve it. Sadly ‘Rat Face’ is a clumsy, barely functioning oaf and finds himself completely out of his depth. To his rescue comes a Bruce Lee-loving bag lady (Pei Pei) to teach him how to save the day and win the hand of the woman he loves.

What could have been an amusing film sprinkled with a bit of action is more like a woefully over-exaggerated piece of fluff that wastes a good cast. Michael Chow is a personable performer and has comic ability among his traits, but here his idiot-buffoon act gets tired quite quickly. There’s fine line between playing the loveable simpleton with a heart of gold and someone frustratingly idiotic and ‘The Spirit of the Dragon’ leaps straight over to the latter.

Bruce Lee parodies (or ‘homages’ as Hung and Chow would probably term their efforts) tend to work much better as a short ‘Kentucky Fried Movie’ kind of sketch. When they are stretched to full length films, they often try and put enough action in the proceedings to excuse the moments that the jokes fall flat. ‘The Spirit of the Dragon’ can’t even call on this – it’s a tiresome experience not worth enduring.