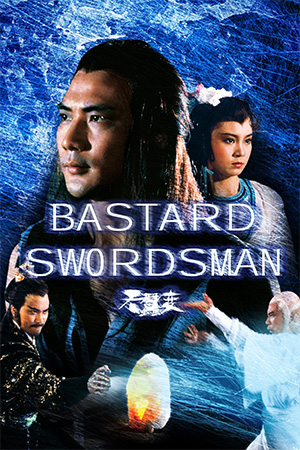 The foundations of the new-wave swordplay film that became all the rage in the 90s have often been traced back to certain past classics. Ching Siu-Tung’s ‘Duel To The Death’ and Patrick Tam’s ‘The Sword’ remain two excellent examples of productions whose influence has been seen to this very day. Even the current favourite ‘Crouching Tiger, Hidden Dragon’ has clear debts to owe to these aforementioned swordplay features. One film that is not mentioned as often is the Shaw Brothers’ masterpiece ‘Bastard Swordsman’. Coming near the end of the golden age of Shaws’ cinematic dominance, ‘Bastard Swordsman’ is not only a clear inspiration for many of the new-wave films that would follow in the 90s, but also stands as one of those cult classics that still commands a formidable following today.

Yen Fei Yang (Tsui Siu-Keung) is the viciously bullied orphan who takes on the unpleasant tasks at a formidable kung-fu school. Constantly mocked by the other students of the school, Yen counts as his only friend the daughter of the resident master. Any internal wranglings between the various members is put to one side when a swordsman from a rival clan reminds the master of the duel he must take part in once a decade. Unfortunately the defending clan chief is well aware that his rival is more powerful than himself. The expected defeat is further complicated when a wandering swordsman arrives on the scene and joins himself to the injured party, immediately adding to Yen’s woes. The ensuing series of confrontations and intrigues soon reveals the individual motives that the numerous parties all have and the role they play in the fate of the martial world. After finally understanding his own past and upbringing, Yen is ready to take on the mantle of avenger for his school and win back the respect that his colleagues have lost. With fighting skills that had been taught to him by a shrouded figure, Yen steps out of the shadows and reveals himself to be anything but the harassed orphan that everyone enjoys picking on. However to have any kind of hope against his nearly superhuman foes, the young fighter must uncover the secrets of his clan’s ‘Silkworm Technique’ and transform himself completely.

Just from viewing the first ten minutes of this extraordinary swordplay film, it’s clear that this is definitely something very different from the norm. There seems to be an atmosphere that combines fantasy with reality from very early on and the production wastes no time in sucking the audience into this incredible world. Once in this environment there is a natural empathy for the title character – superbly played by Tsui Siu-Keung – and a real desire to see him vindicated. Indeed Keung gives the performance of his career, superbly handling the dramatic aspects alongside the physical ones. Vitally though, this Shaw Brothers’ hit features some of the most impressive fight action seen under their banner. Mixing swordplay with hand to hand combat and fantastical FX enhanced tricks, the choreography is simply breathtaking. Bout after bout of superlative duels means there is very rarely anything approaching a quiet moment. The very unusual techniques in the film are also an added attraction with the legendary ‘Silkworm Technique’ being another good reason for viewing.

After all this deserved praise there has to be some notes on the weaknesses in the production. Although a minor quibble, Keung’s transformation to his eventual mastery of the ‘Silkworm Technique’ does seem rushed as the very rare style just fits into place a little too quickly. There are also a few very obvious loose ends that may distract some, but it has to be understood that this was never just intended as a stand alone film; the sequel apparently sorts out this problem. These reasons are still not strong enough to affect the finished product. This is a hugely entertaining film that undoubtedly ranks as one of the best that the swordplay genre has to offer.