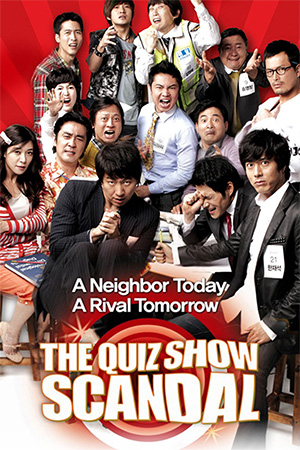 An unfortunate accident brings together a group of assorted oddballs to a police station to explain. Firstly there’s a nagging wife and feckless gambling husband; there is also a pushy father and his underachieving son, a depressed mobile phone seller and a pair of bickering crooks with a nearly-dead body in the boot of their car. The victim, it emerges, was the chief question writer for Korea’s most popular – and lucrative – quiz show and the baffled witnesses see the answer for the multi-million won question on her usb drive when trying to find out her identity.

When everyone involved in the accident is released, their first thoughts are on the potential jackpot of the quiz show that has never been beaten. They all know the answer to next month’s final question, but unfortunately there is the small matter of the preceding twenty-nine questions to solve.

As this witty, often hilarious comedy has the same writer as director, the plaudits are fairly easy to attribute. Jang Jin has built up a reputation for infusing his works with a dry wit juxtaposed with the more traditionally over-the-top Korean humour and ‘The Quiz Show Scandal’ is a great example of this unison. The story starts with the two gangsters arguing about whether or not their hostage can be shot before the official count to five, followed by the quirky introductions of the rest of the ensemble cast and then hits viewers with a blackly comic accident, all before the first ten minutes. The tone is expertly set by the man behind the lens for the following two hours.

‘The Quiz Show Scandal’ is reliant on a cast of very familiar faces from Korean film and television, some are definitive character actors. It’s their skill with the material that draws us into this often wonderfully absurd comedy, even managing to make the viewer root for their escapades. Kim Su-Ro shines as the awkward criminal whose attempts to look cool end up backfiring while Jung Jae-Young steals the film with his ten minute cameo as an unhinged Tae Kwon-Do practitioner.

Despite falling foul of Korean cinema’s biggest shortcoming  – namely not knowing that a two hour or above running time should be reserved for a story that can handle it – ‘The Quiz Show Scandal’ is a keenly-observed comic creation. As nutty as a Korean version of ‘It’s A Mad, Mad, Mad World’ should be while also succeeding in pulling off moments of mordant wit.