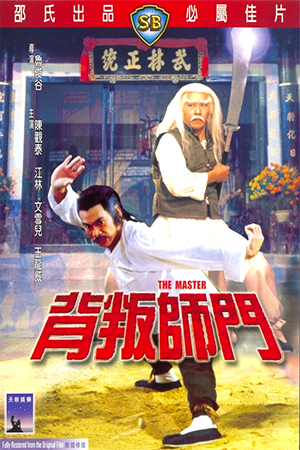 Ko (Tak) is the abused adopted pupil of a prosperous kung-fu school who shows only a passing interest in the things he is being taught. Instead his concentration is occupied by warding off assault from two particularly awkward pupils who are opposed to his part in the clan. Ko’s fairly uneventful life is shaken when a wounded fighter staggers into his sleeping quarters, desperately in need of medical attention. The injured man is none other than Chin Tuen Yun (Chen Kuan-Tai), the well-respected master who had vowed to rid the town of the so-called ‘Three Evil Masters’ – a trio of immoral killers who run the district between them. After sustaining a serious injury to his foes, Chin now needs protecting from the outside world and therefore Ko decides not to tell anyone of his appearance. When this superior fighter regains a measure of strength, he agrees to teach Ko some of his kung-fu skills so that he will be able to counter the physical abuse he endures. Naturally the youngster develops into a more than adequate student and lets his newly acquired aptitude slip, causing a confrontation with his two masters. With him defending Chin against his original master, Ko is expelled by the school and forced out of town. In quick succession Chin Tuen Yun is discovered, killed by the three evil masters and the school is taken over by the aforementioned villains. On hearing the news, Ko rushes back to his home to exact his gradual revenge; the student steps from the shadows to face each of the evil master one by one.

Many will be familiar with the stellar work that Yuen Tak has amassed as one of Hong Kong’s finest action choreographers. Such exciting productions as ‘Iceman Cometh’, ‘Dragon From Russia’, ‘Operation Scorpio’ and ‘Once Upon A Time In China 3’ have all benefited from Tak’s superb touch. Therefore it’s interesting to see this performer – rarely seen in front of the camera – take the lead role in a Shaw Brothers film. As the hero, Yuen Tak is not only engaging but more than able to amaze with his mixture of acrobatics and kung-fu. Although not often seen in anything more than a cameo (see Angels 2), he seems to enjoy the limelight and handles the situations with the confidence usually shown with more experienced Shaw stars. His role is also a pleasant bridge with that of Chen Kuan-Tai; seeing the veteran star with someone who would represent the cutting edge of local film-making in the future makes enjoyable viewing. Both also have ample opportunity to shine in a series of excellent clashes between the protagonists and antagonists. Stand-out moments include Chen Kuan-Tai’s opening battle with all three evil masters and the final retribution of Yuen Tak against Wang Lung-Wei.

Though containing enough reasons to warrant a viewing, ‘The Master’ is still not as polished as the better films being made by the studio at the time. The weak link overall is director Liu Jun-Guk’s handling of the material, something that, while not stopping this from being very entertaining, means that it is slightly uneven. Whereas a better Shaw’s director such as Chang Cheh, Liu Chia-Liang or Sun Chong would have dealt with the comedy in a more controlled way, Liu lets it get out of hand. Therefore the over-used comic antics creep into scenes that really could have done without them, undermining the finished product. 4 stars, just.