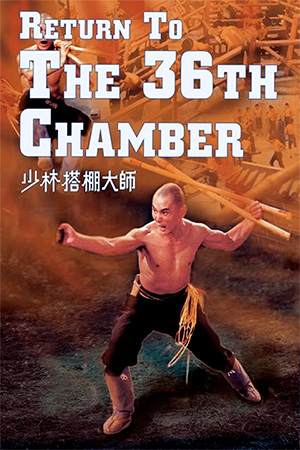 As with many directors who pride themselves on expanding the genre they’ve chosen to operate within, Liu Chia Liang has never really been at home with the idea of sequels. After his debut feature ‘Spiritual Boxer’ performed well at the local box-office, Liang was later persuaded to make his first sequel and, to his credit, he threw all his energy into it. With the stunning impact that ‘The 36th Chamber Of Shaolin’ made in the late 70’s, it was only a matter of time before he was coaxed into filming another follow-up. Once again though, Liang avoided the easy option of a virtual remake of the original and instead presented the audience with a very different creation.

When a new dye factory run by the Manchu powers opens in a busy town, the former peace and calm is shattered. The Manchus take over the local rivals and use their cruel dominance to squeeze yet more work out of the locals. After a strike by these workers results in their beating by the hired lackies, one of their friends is persuaded to intervene. This con-artist decides to impersonate legendary Shaolin monk San-Te and scare the oppressors with a series of misleading tricks designed to give the  impression of kung-fu excellence. The hoax works once, but is then exposed by one of the Manchus top fighters who has been called in to handle the situation. The dye factory workers are now in a worse position than before and are left nursing their wounds after this severe humiliation. Enraged by how helpless he feels, the exposed impersonator decides to go to the Shaolin temple to try an emulate the real San-Te. Once again using his deceptive skills to get into the temple, the eager student observes the rigorous training that all of the new fighters go through. However, when he is exposed by the head monks and is therefore required to plead his case, he is put to work within the temple to make up for his deceit. Little does he realise that this seemingly unimportant manual work is in fact developing him into a formidable fighter.

As was said earlier, ‘Return To The 36th Chamber’ is a very different from the original. Thankfully though, this is another classic from the Shaw Brothers stable. Liu Chia Liang utilises the popular sub-genre of kung-fu comedy to maximum effect making sure that both parts of the equation are fully used. The comedy is the typical Hong Kong broad humour that, when done well, always manages to bring a smile to the face; it certainly proves adequate in achieving this goal. Most importantly the action is of the high standard that is expected from such a tremendous choreographer. Liu Chia Liang makes sure that the series of fights that frequent the story are not only fresh, but also expertly performed. This is well showcased in the exiting finish to the production where heroic Liu Chia Hui faces a posse of antagonists in an intricate battle.

‘The 36th Chamber Of Shaolin’ was a definite achievement in the genre, but this follow-up has its own charm as well. Perhaps over-looked because of the comedy, this remains a formidable piece of entertainment.