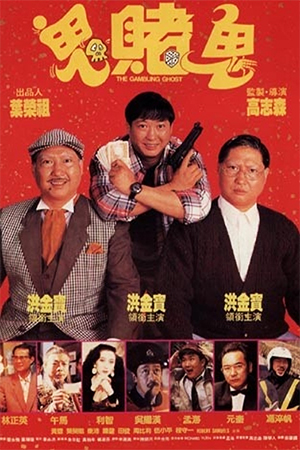 In an attempt to recreate the artistic highs of the 80’s, Sammo Hung combined a few of the popular trends that were finding their way into local cinema. Firstly there was the immensely popular gambling sub-genre that had proven so successful in ‘God Of Gamblers’ and ‘All For The Winner’ – elements from these found their way into this production. Then there was the oft-used ghost hijinks that had been seen from the very founding of Hong Kong film-making. ‘Gambling Ghost’ also offered the chance for audiences to see Sammo Hung in a triple role as grandfather, father and son of the same family. The sum of these parts proves to be another good action comedy from the incomparable Sammo.

Sammo stars as an unfortunate gambler who, along with his close associate (Hoi), longs to be rich like the many socialites he sees in Hong Kong. Instead of using his energy in normal day-to-day work, Sammo finds himself drawn to the get-rich-quick world of gambling where he squanders endless time. His father (Sammo no.2) bemoans his son’s activities and sees nothing but trouble for this hapless chancer. He also remembers what happened to his own father (Sammo no.3) who was killed by gangsters who ran one of the gambling dens. One night though, the grandfather’s ghost appears and tries to strike a deal with his confused grandson which will make him immensely wealthy. The condition for this is that the grandson must also try to avenge his death and get back the money that was stolen during his murder. With Sammo constantly winning at the casino due to his grandfather’s intervention, the killers soon make themselves visible to this unusual team. Therefore the three generations of the family hatch a plot to get back what belongs to them and administer their own justice.

What makes ‘Gambling Ghost’ an above-average feature is undoubtedly the superb performance by the film’s main star. Sammo manages to put different mannerisms into each of his parts and makes the grandfather, father and son very unique characters within the film. Out of the shadows of this towering presence is the diminutive Meng Hoi who once again gives his real-life friend very capable support.

The storyline doesn’t really hold the interest as it tends to start drawn out and then rush the important details at the end of the duration. There’s also an issue with the sub-plots that are seemingly pushed in to the film to keep the viewer’s attention; they unfortunately have the opposite effect. Thankfully though there is some sparkling fight action from the Big Guy and the usual amount of admirable inventiveness. Importantly from the current standpoint, ‘Gambling Ghost’ has that special charm that made ordinary features so watchable. That charm was in constant display during the 80’s and early 90’s, but is something that has since dwindled considerably.