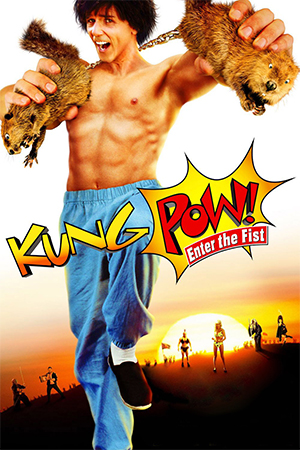 The traditional kung fu movie has often proved to be a source of much amusement for Western audiences, mainly thanks to the humorous dubbing that was utilised during the 1970s.  Several parodies of the genre have been attempted over the years, with the ‘Fistful Of Yen’ section from ‘Kentucky Fried Movie’ probably being the most memorable.  With the re-emergence of kung fu movies in the mainstream, it wasn’t long before a new spoof appeared in the form of ‘Kung Pow: Enter The Fist’.

‘Kung Pow’ is basically Jimmy Wang Yu’s ‘Tiger And Crane Fist’, with Wang Yu removed and replaced with Steve Oedekerk.  The little story that there is follows “The Chosen One” (Oedekerk), a great warrior who travels the land searching for the man responsible for the death of his parents, Master Pain (or Betty as he prefers to be known). When The Chosen One takes shelter at one of the local schools, he befriends a martial arts master who could be the key to tracking down his nemesis.

After seeing the trailer for ‘Kung Pow’, it instantly earned itself a place on my watchlist. The concept certainly looked very promising and it seemed as though there was plenty of potential for comedy gold. Sadly though, the finished film proves to be far less satisfying. The main issue is that it just isn’t very funny and the writing is extremely lazy. There’s no real jokes as such, and all it really consists of is Oedekerk doing silly voices and making random out-of-context comments. There are a couple of half decent visual gags, such as the CG cow fight and the gopher-chuks, but the majority of the movie is far more annoying than amusing. In fact, I highly doubt many of you will make it past the first 20 minutes.

The creators of ‘Kung Pow’ clearly came up with a great idea, but it seems as though that is as far as they got. If you get a giggle out of fart jokes and squeaky voices then it may well be the movie for you, but I imagine most will be better suited looking elsewhere.