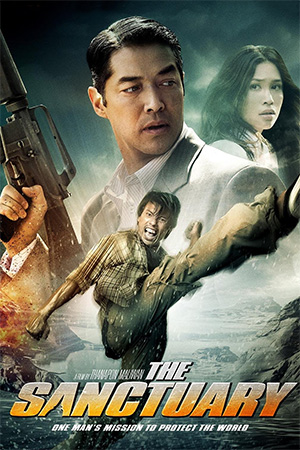 Thai stuntman/action star Michael B. strikes again this time in ‘The Sanctuary’ (which has bizarrely been renamed as ‘The Warriors Path’ here in the UK, though come to think of it the original title didn’t make much sense either). It’s ‘Ong Bak’ light as some more of Thailand’s national treasures (a vase in this case) are stolen and through some inexplicable plot contrivance it’s up to Michael B. and a cute girl to stop the evil Russell Wong getting his hands on it. And that’s pretty much the movie in a nutshell. Well, that and a ton of brutal Thai fighting action.

Clocking in at just less than 80 minutes, ‘The Sanctuary’ knows not to outstay its welcome and mercifully provides lots of bone crunching action to make that brief running time somewhat enjoyable. The story is as flimsy as they come but no point dwelling on that, as it’s just an excuse for some awesome action. Other than a naff sequence involving a black SUV, the action/fight scenes are well put together and feature some intricate combinations and back breaking stunts. Despite Michael B. (who comes from the Tony Jaa school of hard knocks) not being the most charismatic lead he sure throws himself into the action and stunts. Some care and skill has gone into the fight scenes and they are satisfyingly crunchy and acrobatic. From the brutal extended opening battle, to a fight in a junkyard (taken from another unfinished Michael B. flick) to the fight finale, the action is tightly choreographed and pleasingly full of slick boot-work and high impact hits. The best is the 3-way fight Michael B. has with three goons in a wood which features some excellent high kicking combat. The action isn’t revolutionary in anyway but it’s certainly well done and the flick comes alive whenever there are people kicking the crap out of one another.

That’s really all there is to say as ‘The Sanctuary’ doesn’t offer much else. It’s certainly slickly shot and is overall an enjoyable B-movie thanks to the high quota of Thai martial arts action.  It doesn’t touch the likes of ‘Ong Bak’, ‘Chocolate’ or ‘Raging Phoenix’ in terms of scale or epic action but ‘The Sanctuary’ still shows why the Thai’s are at the top of the fight action game. Really a two star movie but I’m giving three for the impressive action.