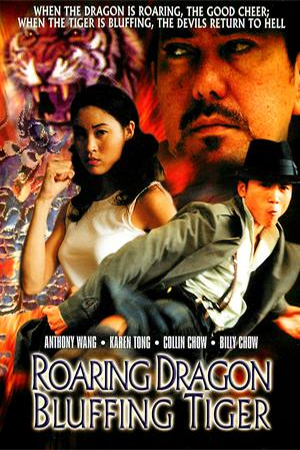 Yes, the title of this film is that bad and blatantly rips off Ang Lee’s superior genre classic but with Collin Chou, Anthony Wong and Billy Chow in the cast surely this is a knockabout bit of silliness that pokes gentle fun at ‘Crouching Tiger, Hidden Dragon’ all the while featuring some kick ass fight action? Alas, it is not. The title bears no resemblance to the film it makes you think of and also bears little relevance to anything in this actual film, instead ‘Roaring Dragon, Bluffing Tiger’ is just a dull and lazy wannabe adventure flick.

Done up like a cut rate Indiana Jones, Anthony Wong looks tired and a little embarrassed as an adventurer after a set of priceless sculptures (some kind of cheap looking golden monkey head statues!). Unfortunately, gangster Collin Chou (still managing to look cool despite the film’s best efforts) and his cronies also want them. So do a bunch of other characters (including the rather cute Karen Tong) that all intersect with one another at various intervals to either romance each other or engage in a series of repetitive fight scenes.

What could have been a fun romp is a lethargic slog only livened up on occasion by some energetic fighting. Despite being filmed in some half decent locations, ‘Roaring Dragon, Bluffing Tiger’ just can’t overcome its low budget: the film looking rather cheap on more than one occasion. There is no real sense of fun (which an adventure film of this type should have), Wong is completely wasted and there is far too much time spent on dull and drawn out scenes of various cast members attempting to romance one another.

While there is a fair bit of fight action there just isn’t enough to make ‘Roaring Dragon, Bluffing Tiger’ a fun ride. Chou cuts a cool figure and busts some impressive moves in the finale but unfortunately the action is just overall too sloppy and repetitive to really excite. An ill judged John Woo aping gunplay sequence (complete with unintentional comedy slide-along-the-ground-while-firing-two-guns scene!) and some random sub-par wirework in the final fight don’t help matters either. Still Billy Chow manages to rock the most ridiculous plaid suit (and still look cool) and his bootwork is as impressive as always: there just isn’t enough of it.

Only die hard Chou, Wong and Chow fans need check this out.