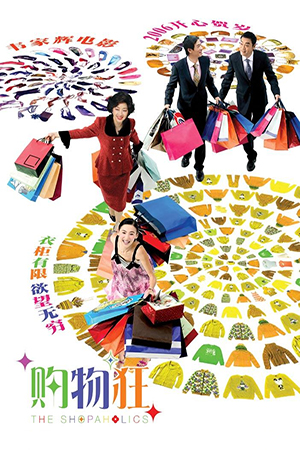 The past two Chinese New Years have seen Wai Ka Fai present audiences with the sublime and the ridiculous; 2004 saw the release of the wonderfully bubbly Hui Brothers homage ‘Fantasia’ while last year viewers had to squirm through the insipid ‘Himalaya Singh’. Quite what we were to expect from the Chinese New Year release of 2006, ‘The Shopaholics’, is hard to imagine, especially when one recalls the dichotomy in quality of the previous two efforts.

One night in 1980, a baby is found in a Hong Kong department store by a security officer and subsequently brought up in a nearby orphanage. As she grows up, Fong Fong-Fong (Cheung) develops an obsession with shopping that she traces back to her abandonment and each waking moment is now devoted to trundling through the many fashion stores in the city. Fong’s mental disorder reaches such compulsive heights that she is fired from her job and is implored by those around her to seek psychiatric help. Taking this advice to heart, she goes to see noted psychiatrist Choosy Lee (Lau Ching Wan) who has his own emotional issues to deal with, but together they aid each others’ recoveries. Added to this pair is the ultra-competitive Richie (Chan) who cannot accept defeat in any area of life and begins to vie with Choosy for Fong’s affections. This confused trio try to help each other through their respective problems while also facing up to their feelings for one another.

Saddled with a flimsy premise that is stretched over a full 90 minute running time, ‘The Shopaholics’ is another insubstantial New Year film that hopes a star-filled cast can paper over the significant – it can’t. It’s little surprise that Wai Ka Fai’s uninspiring effort came off a poor third to the witty ‘McDull, The Alumni’ and the Jet Li smash hit ‘Fearless’ during the lucrative release slot. ‘The Shopaholics’ may not be as maddening an experience as ‘Himalaya Singh’, but it certainly doesn’t approach the dizzy heights of ‘Fantasia’.

‘The Shopaholics’ has trouble overcoming a concept that hardly seems worthy of feature length. The idea of three or four neurotic individuals working out their problems may have been adequate for a short sketch, but here there is little to sustain interest over a full hour and a half. The characters never escape their cartoonish beginnings and there is never even an attempt to inject them with some semblance of realism; Wai Ka Fai makes a cardinal error in the final ten minutes when, despite whipping up an absurd array of caricatures for much of the film, he tries to rely on pathos to close the story. By the end, it is hard to care about the protagonists’ situation or the screwball liaisons that occupy much of the second half.

The saving grace for Wai Ka Fai’s poorly focused production is the natural chemistry between three performers who have worked so often together that their confidence oozes onto the screen. Ella Koon is the weaker link of these leading players, but adds the necessary glamour that audiences seem to demand. These various actors take their place in the film seriously and help to momentarily erase thoughts of how aimless this comedy really is. Whatever Wai Ka Fai has in store for us next year, it is hoped that he will finally learn from his mistakes and attempt to recall the undoubted talents he has rather than trundle out these weaker efforts. ‘The Shopaholics’ is a simple time waster that has a few effective moments, but meanders around until its uninspiring conclusion.