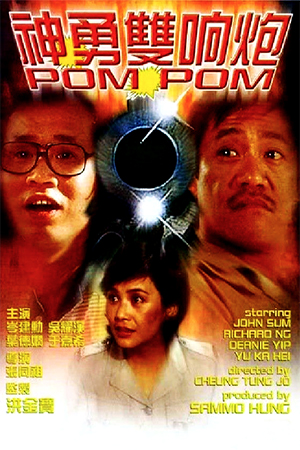 Two of the zaniest members of the ‘Lucky Stars’ team are given their shot in the spotlight for this 1984 spin-off. Sporting a very similar style and tone to the group outings, ‘Pom Pom’ certainly has all the makings of another minor comedy classic. But does it live up to their past successes?

Curly and Beethoven are two cops notorious for being more adept with their mouths than their weaponry.  Whilst on a routine inquiry they discover the dead body of a woman who just so happens to be the girlfriend of one of the biggest drug dealers in town.  As it turns out, she was also the guardian of a book containing a list of all the criminal transactions that had taken place.  This little item is now in high demand by both sides of the law but with these two bumbling buddies holding onto it you just never know where it is going to end up next.

If you’re a fan of the ‘Lucky Stars’ movies then you’ll definitely get a kick out of ‘Pom Pom’. Shum and Ng play pretty much the same characters in all but name, and most of the comedy routines have a similarly silly yet endearing quality. As neither of the leads are exactly the fighting types though, the film opts to have our hapless heroes use their cunning to get out of trouble. This often results in some ingenious and highly amusing antics that really bring out the best of Shum and Ng. There’s also a few big name cameos along the way, including the other members of the ‘Lucky Stars’ team, that will definitely be appreciated by fans of 80’s Hong Kong cinema.

Unfortunately, ‘Pom Pom’ does suffer quite badly in the story department.  While there is nothing fundamentally wrong with the idea of two cops chasing drug dealers, the film rarely seems to go beyond this very basic idea. Instead it drifts from one routine to another, all of which have no real relevance to the main case and are clearly just inserted to setup another gag or two. It also has to be said that some of the comedy does occasionally stray into predictable territory and you may find yourself cringing as a couple of the scenarios run on a little too long.

‘Pom Pom’ is a typically enjoyable 80’s Hong Kong comedy that will definitely strike a chord with fans of the ‘Lucky Stars’. The only disappointment is the film’s rather predictable plot, but who needs a plot when you’ve got Shum and Ng dispensing another batch of handy dating tips!