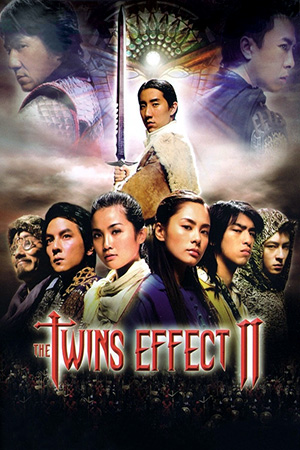 Hong Kong is perhaps the home of the ‘in-name-only’ sequel and ‘Twins Effect II’ is the new big budget addition to these ever-increasing throngs. Though the ‘Twins’ return for the sequel, the genre tackled here is completely different; ‘Twins Effect II’ is a fantastical swordplay flick that takes places thousands of years in the past rather than a modern day comedy horror. Clearly benefiting from lavish production values and a copious amount of visual effects, ‘Twins Effect II’ is another Hong Kong attempt to produce a film that will appeal to international audiences as well as the locals. As is so often the case when such a fusion is attempted, ‘Twins Effect II’ tries so hard to please all of the people all of the time, but ultimately leaves everyone unsatisfied.

In an ancient kingdom where the geographically-dubious Amazons rule with an iron-grip, men are treated as slaves and sold at market like livestock. The Empress has nurtured such an intense loathing of men that such emotions as ‘love’ are punished by execution for both the male and female caught displaying these affections. Loyal henchwoman of the Empress, Bluebird (Cheung) is sent out into the populous to stop an ancient tablet falling into the hands of one of the many rebels who are spread throughout the land. The tablet details the location of the awesome ‘Excalibur’ blade which, when held by the rightful heir to the throne, will conquer the evil Empress and restore equality to the kingdom. A pair of naive theatre performers eventually find the tablet and decide to uncover its secret, while greedy slave-trader ’13th Young Master’ (Choi) decides to tag along in the hope that the journey will lead to riches. Along the way, the trio are joined by Bluebird who manages to cover up her real identity and keep track of those who are keen on overthrowing the Empress’ cruel reign.

All that would be needed here is a faded reality television star and a former member of the ‘Emmerdale’ cast and this would truly earn the tag ‘pantomime’. Outrageous storylines, wicked rulers, forgotten heirs and ludicrous romance are all present here as is the predilection with plagiarising every popular culture icon of the moment – all the ingredients demanded of that great British tradition.  With characters named ‘Crouching Tiger, Hidden Dragon’, knowing references to ‘The Matrix’ and a special sword called ‘Excalibur’, ‘Twins Effect II’ is the ultimate scattershot blockbuster that throws in everything bar the kitchen sink and yet is still found wanting.

My comparison between the pantomime tradition and ‘Twins Effect II’ is perhaps a little unfair – at least the former knows its target audience. ‘Twins Effect II’ cannot decide whether the narrative should be taken seriously or whether the tone should really be one of parody, while the appearance of two directors behind the lens clearly doesn’t help the film’s clarity. While Yuen Kwai has a history of making films that awkwardly throw together drama and farce (‘Mahjong Dragon’ for instance), Patrick Leung’s involvement seems to be very difficult to pin-point; none of the personality that his other films had have made any appearance here. Neither director, though, has much idea of how this muddled production should progress and eventually the storyline grinds to a halt while the artificial romances take centre stage. When Tony Leung Kar Fei switches to his hammy alter-ego, you know that the film-makers have lost significant interest here.

Much will be said about ‘Twins’ and whether their appearance in the film is a factor in its eventual grid-lock. As I’ve stated too many times, Charlene Choi is only capable of playing ‘kooky’ these days and ‘Twins Effect II’ shows her at her most maddening. Although she’s meant to be a love interest here and even though she’s an attractive actress, she comes across as more of an annoying little sister than the kind of woman that anyone would fight for. This often unlikeable character is reappearing in Choi’s films so obviously someone finds her petty tantrums charming – a thought that is deeply unsettling. Gillian Chung, on the other hand, looks uncomfortable with the daft antics that take place around her; she’s undoubtedly a beautiful actress with some hidden potential, but it will never be realised while she’s in such productions. Riley Ip had the right way of directing both actresses in ‘Just One Look’, but it seems that such pleasingly well-rounded characters are currently out of reach for both Choi and Chung. Despite their inadequacies here, neither of the ‘Twins’ should shoulder the blame on their own – everyone deserves to be guilty of recriminations in this flawed production. Jaycee Chan plays ‘dopey-naive’ well, but finds the romance with Chung an emotion too far; it would be unfair to be too critical of him in such an early role, but giving such a pivotal character to a newcomer is a serious oversight by the film-makers.

There must be a middle-ground between the overblown farce of ‘Twins Effect II’ and the emotionally cold ‘Hero’ somewhere. Directors are dividing into either camp at the moment and the fact that the swordplay genre has spawned so many classics makes this quite sad. While ‘Hero’ is certainly the superior film, it would be nice if the balance between humour and self-importance that the genre last successfully struck in the early-90s would be again achieved. ‘Twins Effect II’ shows admirable scope with its vast landscapes and ornately designed sets, but cannot create a harmonious blend throughout its duration. The over-used CGI does, at times, look ungainly, but this is a problem with modern film-making around the world rather than just this one production. Nonetheless, it’s unfortunate that the concentration of the film is on the effects and the parochial ‘comedy’ and not the other virtues that used to be second-nature to Hong Kong cinema.

‘Twins Effect II’ was clearly enjoyable to make and throws up a few moments of promise, the main theme song being one of them. To sit through it isn’t as arduous as I may have made out, but to see so much money lavished on such mediocrity is very disconcerting. The expected moments of action are good, but hardly special and certainly don’t show a choreographer of Yuen Kwai’s pedigree in the best light. Each grand action set-piece exudes a feeling of deja-vu and even the eagerly-awaited re-match between Jackie Chan and Donnie Yen lacks impact; too many camera tricks and not enough focus on their real abilities proves to be the death knell here. Maybe, despite our collective wishes, CGI and wirework-enhanced fight scenes really are here to stay. In conclusion though, ‘Twins Effect II’ is just too ordinary to justify its budget or obvious talent. As Donnie Yen says at the film’s conclusion “The future is in the hands of these young people” – on the evidence of ‘Twins Effect II’, this isn’t a comforting thought.