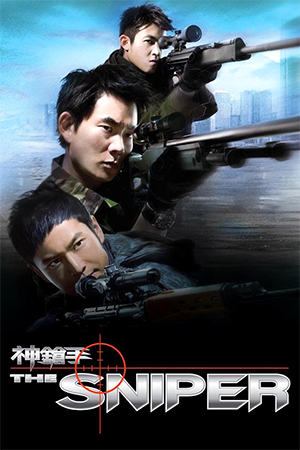 Held back from release (and reputedly re-edited somewhat) due to a certain scandal co-star Edison Chen was caught up in, ‘The Sniper’ finally saw release and while essentially its just a load of flashy hollowness, there is enough tension and expertly mounted action to warrant a viewing or two. Hartman (Richie Ren) heads up an elite team of snipers for the Hong Kong police. After beat cop OJ (Edison Chen) shows skill and accuracy in a hostage situation cum shootout, Hartman recruits him to his team. Hot headed but skilled with a rifle, OJ locks horns with Hartman, not least when it comes to the apprehension of another former sniper, Lincoln (Huang Xiaming). Recently released from prison, Lincoln has gone loco after killing an innocent while on the job and wants revenge on the police force (i.e. Hartman) who failed to stick by him. OJ is somewhat in awe in of him but Hartman knows how deadly he is and the trio lock into high powered rifle combat across Hong Kong.

If you like slick, glossy action flicks with lots of pretty boys posing, then ‘The Sniper’ is right up your street. Eschewing grit for shiny style, Dante Lam’s film has way too much posing, slow-mo and melodrama to recommend it as a full on action film. While the leads aren’t bad in their respective roles, they never convince as rigorously trained snipers: more like models from a Gap commercial that know how to hold a rifle. They run around a lot in slow motion, wear designer vests and pose with their expensive watches and new mobile phones. Still there is some respite with bad guys Jack Kao (‘God Man Dog’) and Liu Kai Chi (‘SPL’) adding some bite to proceedings as gangsters caught up in Lincoln’s crazy revenge plot. Huang Xiamin isn’t that bad either as the unhinged Lincoln and director Dante Lam (who also made the much better and grittier ‘The Beast Stalker’) still manages to ring out some tension despite the rising melodrama.

What saves ‘The Sniper’ from being a complete washout is some impressive action scenes. Co-ordinated by Yuen Tak (‘Three Kingdoms’, ‘2000 AD’) the action scenes, while not an over abundance of them, are tense and full of fire power: showcasing the snipers weapon of choice. Highlights include a shootout in a cramped elevator that turns into a running chase and the sniper vs. sniper showdown. If the rest of the film had been as edgy and exciting as the action scenes, then ‘The Sniper’ would have been a much more satisfying experience. However, too much gloss makes the film more of a second rate Hollywood wannabe than a gritty Hong Kong action film. Not a complete loss but the stars and director have done much better.