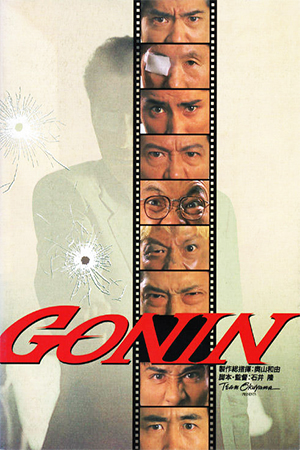 Going by the international cover art and credits, you might expect ‘Gonin’ to be another exhilarating insight into the yakuza featuring Takeshi Kitano as the gun-toting anti-hero. However, this film isn’t quite as clear cut as that and it offers up an entirely different slice of yakuza pie…

Bandai (Sato) was once a famous singer until the day he wound up hugely indebted to the Yakuza.  This ruined his glamorous lifestyle and he found himself operating out of their pocket as a humble night club owner.  Now his tolerance has reached boiling point and he decides to enlist the help of a few of unsavoury characters to assist him in breaking free of his shackles. Together they decide to rob the hideout of the local Yakuza boss, but they have to remain anonymous if it is to go through successfully.  Of course, things never quite go according to plan and when one of the group is tortured into talking, the five men find themselves pursued by the Yakuza and a mysterious one-eyed hit man (Kitano).  On the run and wanted by some of the most dangerous men alive, you have to wonder what price the gang will pay for their freedom.

In its simplest terms, ‘Gonin’ is an over-the-top tale of the worm that turned. A promising enough concept for a yakuza flick, you may think, but unfortunately it doesn’t start out all that well. The film opens by bombarding the viewer with numerous poorly explained flashbacks and rushed introductions to several outskirt characters.  It then proceeds to add insult to injury by introducing a number of grotesque character traits and some extreme violence.  I’m certainly not a prude by any stretch of the imagination, but graphic scenes of rape and a father that batters his family to death just aren’t all that fun to watch.  However, if you stick with it long enough then it does actually become quite rewarding. After settling in with a fairly effective narrative, the film dishes up just the right amount of tension and twists to really suck you in.

From the cast, Takeshi Kitano is the most recognisable face and he certainly puts in his usual performance as a charismatic killer. Unfortunately though, his role is a small one so you have to look elsewhere to get your acting fix. Considering he is the lead, Sato should be the man but for some bizarre reason he remains very quiet and humbled throughout.  Thankfully though, Masahiro Motoki more than makes up for this as he practically leaps off the screen, hurtling the viewer through a rollercoaster of emotions, ranging from fear to genuine empathy.  The little action that accompanies ‘Gonin’ is certainly nothing to write home about but it does just enough to remain convincing. It’s also occasionally quite stylish, particularly during the latter moments when Kitano enters the fray.

If you manage to remain interested while the film establishes a story and can tolerate the odd sense of the macabre, then ‘Gonin’ does provide a few flashes of excellence. It’s probably fair to say that its reputation precedes it and the inclusion of Kitano is deceiving, but it’s solidly handled and contains a few intriguing twists that keep you hanging on right up until the end.