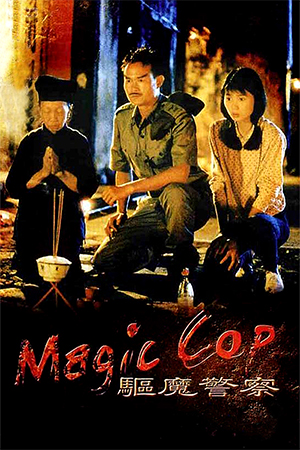 As one of Hong Kong action cinema’s greatest performers, Lam Ching Ying has contributed greatly to the pantheon of classic action flicks that are available worldwide. He has won awards for his fight choreography and appeared in some of the finest fight scenes ever opposite greats like Yuen Biao and Jackie Chan while being a member of the stunt teams of both Sammo Hung and Bruce Lee. Yet many fight fans still see him merely as a Taoist priest thanks to his fabulous performance in ‘Mr Vampire’, and he was always typecast as such whenever he was asked to play a leading role.

Both the director of this feature, Tung Wai and star Lam Ching Ying were handpicked by Bruce Lee and seen opposite him in ‘Enter the Dragon’, highlighting their quality, (although most people wouldn’t recognise them), and it is fair to say that both have made superior features in their HK careers, but that should not deter you from seeing this worthwhile action flick. Essentially an updated version of Lam’s earlier and groundbreaking success ‘Mr Vampire’, we see Lam as a modern day cop battling against supernatural forces using his familiar Taoist techniques.

Unlike other action stars, Lam did not go for lengthy fight sequences, instead using his superior hand-to-hand skills to quickly defeat or restrain his opponents. Many of these skills are a joy to watch, and while not as aesthetically pleasing as the usual kicks and flips seen in other martial arts movies, they are still exciting and true practitioners of arts like Wing Chun will be impressed. There is much to enjoy about this film, and the ingenuity shown in many scenes is typical of HK, proving that it can offer a lot more than found in Hollywood no-brainers.

If you have the chance this is definitely worth checking out, however, at present it does not have a DVD release. Hopefully someone like HKL will release it in the future. If, like me, you are a fan of Lam Ching Ying then VHS copies are available if you hunt them down.