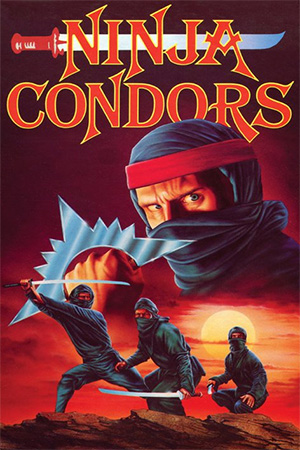 Perhaps one of the best of the many (many) ninja movies to bear the Filmark International Ltd mark and mainly due to the extreme amount of sheer ninja action lunacy it packs in, means ‘Ninja Condors’ is a blast.

It all starts a bit ropey mind, with a succession of seemingly unconnected scenes of extreme violence and ninja action thrust on the viewer. This includes some sweet ninja training action; a young lad seeing his father ripped part by motorcycles (yeah, this one had an extreme violence edge!); said boy rescued by a cop, then grow up and become a ninja named, err, Brian (Lo Rei); join a crime syndicate led by the amazingly monikered Lucifer (Nicholas); Brian then having to show his loyalty to Lucifer by killing the cop (and his wife) who rescued him, with a chainsaw!; to then join up with another badass fighter named, err, Eddie (Thomas); and the two of then take on Lucifer and his never ending army of ninjas! And that’s pretty much just the first act, as the remainder of film is pretty much Brian and Eddie taking on various numbers of bad guys and ninjas in a succession of awesome and increasingly insane fight scenes.

Once the film settles into the main narrative of Brain and Eddie teaming up to take on Lucifer (he’s called Lucifer throughout the film in all seriousness, no irony!), ‘Ninja Condors’ is mercifully coherent for a Filmark ninja flick. It’s mainly ninja action a-go-go for with some wickedly staged fights ramping up the craziness and violence. Blood flies, limbs are chopped off, heads severed during a surfeit of great fight scenes that take place in such locations as a shipping yard, a lumber yard, the inevitable raid on the bad guys mansion, a carousel (!), and an ice rink! Yep, ninjas on ice!! The story may be bare bones, the film obviously made over different periods of time (well, if star Lo Rei’s ever-changing length of hair is anything to go by!) but who cares when the ninja action is this good. Multiple use of weapons, fighting-styles, disappearing then re-appearing ninjas (!), and crazy stunts make for some kinetically charged action, that even squeezes in an epic scene of gunplay come the finale!

Lo Rei and Thomas (no strangers to the ninja movies of the 80s!) bring the fight skills as the two ninja-busting heroes (with Thomas bringing some much-needed charisma also!) and Nicholas (‘Sakura Killers’) also brings the moves and hams-it-up through the stratosphere as the hilariously over-the-top bad guy. It’s all very low rent, packed with enough barminess and bad acting to fill several ninja movie but has energy to spare and if you’re watching a mid-80s ninja flick from the Filmark stable, then you probably know what you’re getting yourself into. Plus, you’re probably just here to see some sweet ninja action (as you should be!) and ‘Ninja Condors’ more than delivers on that front.