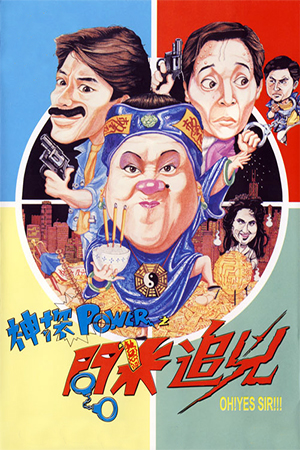 After appearing in fan favourites such as ‘The Outlaw Brothers’ and ‘Prodigal Son’, Frankie Chan is an actor/director who is often cited as one of Hong Kong cinema’s action icons from the 1980s.  Despite displaying a clear ability in the Martial Arts and the odd flash of quirky charm, I’ve personally never considered him to up there with the true greats of the era.  Unfortunately, ‘Oh! Yes Sir!!!’ is not the film to change my opinion…

Power Chan (Chan) and his partner (Yung) are on hot on the trail of a notorious weapons smuggling ring. When they get too close, the bad guys decide to hire a professional killer by the name of Nine Face Fox to take care of the cops. Fox has the ability to change his appearance to resemble anyone and he uses this skill to frame Power for the murder of a witness.  Now that he has become a key suspect, Chan finds himself on the run from the police so he turns to a psychic (Tsang) for help.  Using her power to communicate with the dead witness, Chan hopes to clear his name and take down the smuggling ring once and for all.

For fans of 1980’s Hong Kong action cinema, the setup for ‘Oh! Yes Sir!!!’ probably sounds quite enticing. Sadly though, on this particular outing the various elements rarely seem to gel and there are numerous oddities to be found here. For starters, the film just isn’t particularly funny and the overly crude humour lacks the subtlety and charm that we have come to expect from Hong Kong comedies. It also makes little to no sense to have leading actors play members of the opposite sex, and it is a decision that leaves Wanda Yung looking awkward while wasting the obvious talents of Eric Tsang. Leading man Frankie Chan also puts in an extremely bland performance, and his short spurts of action (none of which are that exciting) are really the only bright spots in an otherwise disappointing effort.

‘Oh! Yes Sir!!!’ could have perhaps been more appealing if there had been added emphasis on the action or a little less smuttiness in the humour. As it stands though, this is a sub-par effort that falls some distance from the classics of the genre.