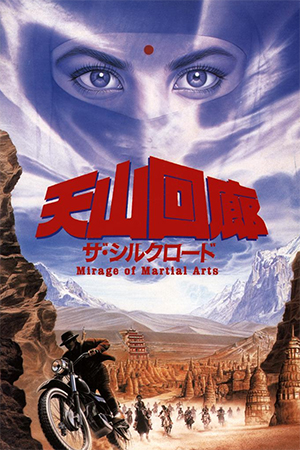 In the same year as Jackie Chan was the dominant figure at the Hong Kong box office and the local action genre was blossoming, Tsui Siu Ming released his own magnum opus. Backed by a Mainland production company, ‘Mirage’ was the People’s Republic answer to the dominance of its tiny neighbour.

Photographer and general adventurer for hire Tong (Yu Rong Guang) is asked to accompany a convoy of goods as it makes it way along China’s famed ‘Silk Route’. Such a lucrative trail is a obvious enticement for the bandits in the area and they predictably launch a swift, aggressive attack. Thanks to a combination of Tong’s fighting abilities and the firepower of the convoy’s protectors, the highwaymen are finally repelled and the journey can be concluded. As the heroes re-group, a remarkable vision of an enchanting woman fills the horizon and leaves even the natives baffled. Tong successfully completes his task to act as an escort to the convoy, but is ultimately haunted by the vision and elects to track down this mysterious figure. He therefore sets off with his best friend and an impromptu guide into the harshest reaches of Mongolia hoping that the woman he is slowly failing in love with can be found.

A nutty, wondrous and at times exhilarating action adventure, ‘Mirage’ encapsulates all of the elements that generated such impetus during Hong Kong cinema’s 80s swansong. This may be a Chinese production, but make no mistake, this is an opulent production that owes as much to Jackie Chan’s ‘Armour Of God’ and Sammo Hung’s ‘Millionaires’ Express’ as it does to anything north of the border. It’s plot may not be as cohesive as its inspiration, yet it certainly has enough adrenalin-pumping action to hold its own among its contemporaries.

The concept of ‘Mirage’ has potential, aiming to be a romantic swashbuckler in the mould of ‘Indiana Jones’. Needless to say, Tsui Siu Ming discovers the limits of abilities, allowing the story to get caught up in needless asides and tension-dispersing melodrama (though this is enhanced more by the histrionic English dubbing than anything else). He clearly lacks the Spielberg touch, nudging the story to one side as the film progresses and concentrating on over-the-top thrills. Yet this is where ‘Mirage’ truly captivates, using the remarkable talents of its cast to weave together a few quite startling action sequences. An early bar brawl looks as if it verges on Wu Shu style acrobatics rather than realism, but the choreography gradually ascends in quality. By the hour mark, the viewer is treated to an extraordinary sword fight that features speed, precision and imagination, three qualities always championed by Jackie and Sammo. As if this and the following fisticuffs aren’t enough, Tsui Siu Ming then piles stunt after breath-taking stunt into the explosive finale, concluding with a jaw-dropping fire stunt. In an age where such bravery and inventiveness has been replaced by a p.c., it’s impossible not to applaud what has just been seen.

‘Mirage’ also benefits from the harsh, desolate, yet exotic vistas of Inn Mongolia, used so well throughout. Tsui Siu Ming gets a little carried away with the local culture, devoting a needless amount of time to a tribal game (fine if the duration wasn’t so brief), but such things do take the traditional frameworks of action cinema and put them in a location that compliments them so well. ‘Mirage’ is a feast for the eyes and Cuppa Soup for the brain. Nevertheless, when the former is done so exquisitely, the latter isn’t quite so jarring.