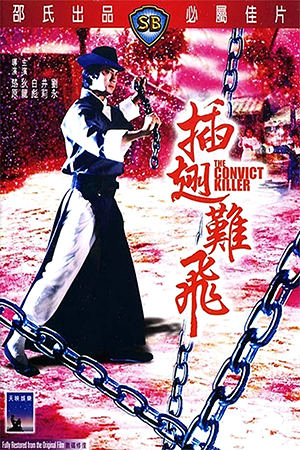 After spending fifteen years in prison on trumped up charges of opium smuggling, stoic ex-convict Tong (an icy cool Lung) vows to find the person who set him up, ‘Black Leopard’. The only problem, as the tough-fighting anti-hero discovers, is that no-one knows the real identity of ‘Black Leopard’ apart from his secretive sextet of killers. Tong arrives in a location he has linked with his target’s name and it isn’t long before his mission ruffles the feathers of the resident gangster in control. Also arriving in town at a similar time is a doting wife desperate to find her husband who disappeared around the time that Tong was imprisoned and an impudent knife thrower whose reasons are much less clear. Foiling attempts on his life and double-crosses galore, Tong starts to realise who he can trust and who he cannot as he closes in on ‘Black Leopard’.

Chor Yuen pieces together an interesting film noir kung-fu film with ‘The Convict Killer’. Femme fatales, damsels with hidden motives, wronged heroes and deceit – it could almost have come from the pen of Dashiell Hammett, albeit with a resolutely Eastern style. The plotting isn’t quite as water-tight as ‘The Maltese Falcon’, but at least it shows the genre trying to balance a suspenseful story without lurching too broadly into convolution. ‘The Convict Killer’ throws the usual McGuffins and twists into the blend while pulling off even the most obvious with that certain Chor Yuen style. One scene does verge on self-parody (a whole succession of betrayals and cackling villainy in one particular short five minute scene) though this is much less the case than in some of Chor Yuen’s Gu Long-inspired swordplay extravaganzas.

The director utilises a number of sound stages on which to tell this story with varying degrees of success. As this was made during a time period where Golden Harvest and various independent features were using outside locations, ‘The Convict Killer’ has a very nostalgic feeling about it. Some scenes appear constrained by the indoor sets, seemingly desperate to break free and explore the countryside of the world they exist in. Meanwhile other moments clearly benefit from the artistic staging of the film, particularly the conclusion where the characters face each other in a snow-dappled clearing. It may look as artificial as a West End production, but in this case the effect works well enough to become a strength for the production.

While the locations range from the distractingly artificial to the atmospheric, the action choreography also flits between intricate invention and predictable swordplay, but the story and its execution seem to be where Chor Yuen’s heart lies. The numerous conflicts between the hero and the multitude of assailants often appear older than the film’s 26 year age implies. Nevertheless, despite this not being a film that will satiate those looking for the kinetic rush of Shaw Brothers’ more notable flicks, it is constructed in a way that is easy to appreciate.

‘The Convict Killer’ is held together by the confidence of the man behind the lens and the excellent cast gathered together. Ti Lung is suitably moody as the troubled Tong while Jason Piao Piao offers him an adequate foil to play against. Ching Li is unfortunately wasted in an underwritten role, yet even she has a character who contributes to the final twist, adding a dramatic caveat to a successful offering. ‘The Convict Killer’ may not be accomplished in every area, but there’s enough quality associated with the production to ensure it’s an impressive 90 minutes.