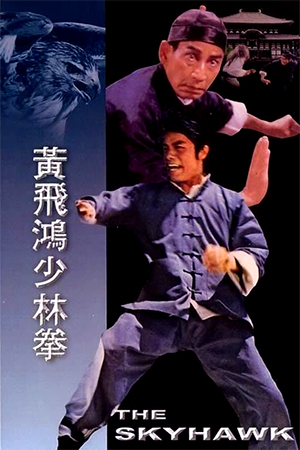 The legendary Wong Fei Hung has been a character ably portrayed by some of Hong Kong cinema’s great stars. Jackie Chan gave the folk hero a seminal comic spin in the classic ‘Drunken Master’ films, while Jet Li gave his best performances in the ‘Once Upon A Time In China’ series and even Liu Chia Hui and Wang Yu have dabbled with the role. However, most viewers would name the late great Kwan Tak Hing as the quintessential embodiment of the righteous kung fu master. ‘The Skyhawk’ was Kwan’s return to the role that brought him fame and the introduction of the character into a harsher modern setting. Although ‘The Skyhawk’ is often overshadowed by later hits ‘The Magnificent Butcher’ and ‘Dreadnaught’, it’s still a cut above the standard fare.

With his adoring pupil Fatty (guess who?) by his side, Wong Fei Hung – the so-called ‘Skyhawk’ – travels to exotic Thailand to see his old friend Mr. Chu. On the way, Wong sees a young fighter, Leo (Carter Wong), fending off a band of attackers on the roadside only to encounter him later after he has been severely beaten. Obviously the noble Wong takes the stranger back to the house of his friend and aids him in his recovery to health. After a short time Leo is back on his feet, is accepted by Wong as a student alongside Fatty and shows himself to be a quick learner. Meanwhile Mr. Chu – who manages the workers at the local pier – finds himself under increasing pressure from devious rival Mr. Ku  who wants to control the entire area for his own nefarious reasons. Mr. Ku decides to force one of Mr. Chu’s key workers to switch sides and influence the men to follow suit; the plan is only half successful though as Wong Fei Hung and his pupils help there old friend out. The increasingly vicious Ku tries to use his hired muscle to threaten Wong, but soon discovers that ‘The Skyhawk’s reputation is very well earned and he will not ignore unrighteousness. Nonetheless, Ku wants to get rid of any opposition and so he hires a wild, long-haired, super-kicking villain (who was earlier responsible for Leo’s beating) to achieve his goals. This move leads to their gradual domination of the pier and the constant humiliation of Wong Fei Hung – who refuses to be drawn into all-out conflict – and his underlings. However, the situation turns tragic when Fatty’s gambling-obsessed brother in-law is killed by Ku and Mr. Chu discovers that his bitter enemy is  a murderer on top of his other crimes. Now Wong Fei Hung, ready to enforce justice, goes face-to-face with Mr. Ku and his awesome hired fighter.

It’s easy to make a formulaic kung fu film; simply make clichés as predictable as possible, the storyline prosaic and  increasingly tepid, the characters dull and uninteresting. Thankfully, director Chan Cheng Ho is accomplished enough not to fall into this trap. Although the storyline is nothing out of the ordinary, Chan gives his characters a slightly different edge to them a real battle of wills between heroes and villains. Also important is the way he’s created a few superb scenes out of potentially expected moments – something that lesser directors would never aspire to. The best of these is when supervillain Whang In Sik is trying to force Wong Fei Hung into a fight; while Wong meditates, his adversary pours boiling water on him to bait him into conflict, but Wong Fei Hung remains supremely calm. Moments like this create a tension that makes the final fight even more exciting – something which lesser genre films often fail with.

‘The Skyhawk’ may not be up to the standards of ‘The Magnificent Butcher’ or ‘The Dreadnaught’, but for a film made in 1976 it features some fantastic choreography. Top marks to Sammo and his action group for giving Whang In Sik’s kicking ability a perfect showcase and also making Kwan Tak Hing’s eventual victory look fully convincing. The fight action that both men take part in is not only exciting, but also a cut above the average 1976 productions. ‘The Skyhawk’ has many qualities, but perhaps the film’s biggest commendation deserves to go to Kwan Tak Hing. Despite his advanced years, Kwan is physically impressive and, though being doubled for the more acrobatic moves, is always convincing as the masterful Wong Fei Hung. Kwan’s performance is a reminder that he will always be the epitome of the senior Wong Fei Hung and ‘The Skyhawk’ is a superior example of his talents.