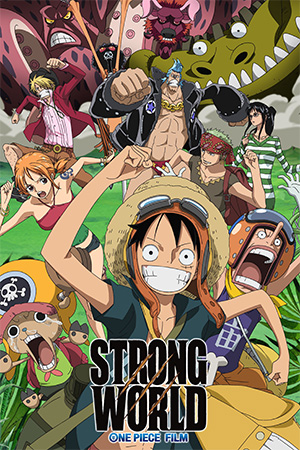 The arrival of ‘One Piece Film: Strong World’ marked a real milestone for the movies in the franchise. For the first time ever, the film was based on an original story by series creator Eiichiro Oda and he personally oversaw the entire production. So, with Oda on-board does ‘One Piece Film: Strong World’ blow the competition out of the water or just sink without a trace?

Shiki the Golden Lion is a legendary pirate captain who is known for being the first prisoner to escape the confines of Impel Down. Since that day, no one has seen or heard from him… well, that is at least until now. During one of their merry voyages, the Straw Hat pirates suddenly encounter a floating pirate ship. Being the helpful fellows that they are, they decide to assist them by warning their neighbours about an incoming storm. After they are all safe, the ship’s captain reveals himself to be Shiki and, after witnessing the navigation skills of Nami, he decides to kidnap her for his own crew. Before the Straw Hats can intervene, he casts them off into the sky and scatters them across several floating islands. Now the crew must find their way back to each other so that they can mount a rescue mission to bring back Nami and free the people of the islands from the iron fist of Shiki.

Right off the bat, it’s fairly clear to see that ‘One Piece Film: Strong World’ is a grand production. The opening sequence is filled with lavish landscapes and several large action sequences that immediately set a high benchmark for the scale of things to come. Similarly, the animation is a noticeable step up from the show, with a number of extravagant styles and shots that are definitely more befitting of the big screen. Despite all these visually impressive elements though, once the story starts to kick in the cracks begin to materialise. Forget about any connections to the show’s ongoing story or even anything that really sticks in your mind, this is little more than a standard set of villains who just want to cause havoc. Now, this is not to say that it is any worse than your average filler movie, but when you consider that this is a product of Eiichiro Oda himself it does seem to be surprisingly lightweight.  Couple that with the fact that the running time is almost two hours and yet it fails to really develop anything significant or emotionally compelling, and it really does seem to be a far cry from the Oda that created such an amazing concept.

Thankfully though, this is still ‘One Piece’ so you can always rely on the personalities of the crew to get you through even the weakest of storylines. As is to be expected, ‘One Piece Film: Strong World’ is no exception and there are definitely several laugh-out-loud moments that help to make the movie infinitely more enjoyable. It’s also nice to see the crew interacting as a team again, as in the anime they have been separated for so long that you forget just how much fun it is to watch them working together or tearing each other apart. Special mention must also be given to the specifically designed attire for this outing, simply because getting to see Luffy in pilot’s goggles or Chopper in a little bear outfit is a real treat that anyone can appreciate.

As for the action, this is also a little subpar for such an important event. As mentioned before, there are some great bits in the opening segment that really get the juices flowing, but after this the film starts to focus more on the plot/villains so it is some time before we get our next taste of solid action. Once it does materialise, it has to be said that some of the animation is absolutely outstanding and the sequence where Luffy hits second gear looks far better than it has ever looked before. Sadly though, some of this feels rather wasted as they generally defeat opponents with one or two hits and the focus seems to be more on the overall adventure rather than specific confrontations. In keeping with this, even the final battle seems to leave something to be desired, as Luffy opts to use a cleverly devised finishing move rather than pummelling the hell out of his opponent.

‘One Piece Film: Strong World’ is a good movie, but sadly not the great one that I was hoping for. Despite all the talk prior to its release, the film is essentially just routine filler that, whilst definitely still fun and impressive to look at, doesn’t exactly break any new boundaries. Not to worry though, fans like myself will always find something to enjoy and I’m sure subsequent viewings (with lower expectations) will allow me to appreciate it more.