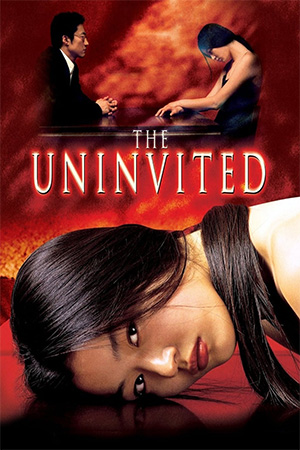 Taking a much more mature and subtle (maybe too subtle) approach to the ghost story, Korean film ‘The Uninvited’ is a serious, quietly disturbing supernatural drama. With not a long haired ghost girl in sight and eschewing shock tactics and gore for mounting tension and unease, writer/director Lee Soo-youn was obviously trying for something different with his film. It’s certainly a noble effort and a refreshingly grown up horror movie but unfortunately, ‘The Uninvited’ is just a little too serious in its intentions to be a thoroughly satisfying spooky tale.

Things begin well with architect Jeong-won (Park Shin-yang) falling asleep on the subway one night on the way home from work. As he disembarks he notices two kids sitting on their own in one of the carriages but the train leaves before he can see if they are alright. The next day he learns they have been found dead on the subway and soon he begins to see their ghostly dead bodies in his apartment. But he’s not the only one who can see them as so can lonely, narcolepsy suffering Yeon (Jun Ji-hyun). She is grieving the loss of her own child at the hand of a close friend who inexplicably threw the child from a high story building to its death. The two form a strained alliance as they attempt to come to terms with their troubled pasts and discover why they are seeing dead children all over the place.

‘The Uninvited’ is not so much a horror but more a drama with a slight supernatural tone. Nothing wrong with this as Lee Soo-youn’s film starts off with spooky goings on sparking the interest and an overwhelming sense of unease building up nicely as the characters become more and more immersed in ghostly goings on. But around the half way mark, the director somewhat abandons the supernatural slant to concentrate on the drama. His characters are certainly fleshed out and it’s great to see a film which takes its subject and its players seriously, the characters coming off as real people rather than horror movie stereotypes. But too much time is spent on Yeon’s court case into the death of her child and events in both principle characters earlier lives that the film can’t help but slip into slow moving melodrama. In addition, things are left just a slightly too ambiguous and loose ends not tied up enough that proceedings also fall into pretentiousness. There is just a little too much of characters sitting around, talking slowly and quietly as they explain things when the emotion should really be pouring out and events reaching some kind of climax.

That said the makers nail the freaky flashbacks well as we see events that lead the characters to being the way they are now and Jun Ji-hyun (from ‘My Sassy Girl’ and ‘Blood: The Last Vampire’) gives an impressive performance as the tormented Yeon. There are also some rather shocking moments featuring the death of children (faint of heart be warned!) and, as mentioned, there is an effective sense of unease. However, this is unfortunately not maintained over the course of the film which ultimately seems to be too wrapped up in its own eagerness to be a very subtle, thoughtful and ambiguous ghost story. But being ambiguous and leaving out the ghostly shocks doesn’t guarantee you a better or more intelligent film and unfortunately the characters and story in ‘The Uninvited’ become less intriguing and engaging as the film progresses. Good in parts, and theory, but frustratingly disappointing as a whole.