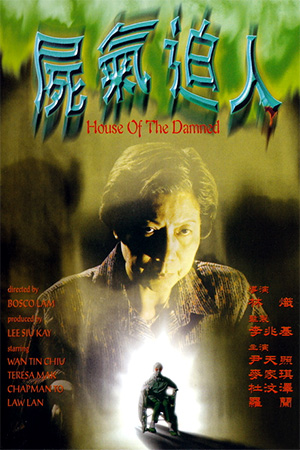 Amid a power outage during the Ghost Festival, attractive young bar hostess May (Yeung Fan) is assaulted and thrown from the window of her rented Kowloon room by a violent spirit. The following day small-time actresses Kiki (Teresa Mak) and Big Bust (“Lonely”) find themselves amazingly cheap accommodation with widowed invalid Aunt Nan (Helena Law); unknown to either is the fact that they’ve just signed on to the same room beset by tragedy the night before. When Big Bust is molested by the same predatory phantom, she calls on fellow actor and spiritualist Chow Tung (Oscar Lam) to exorcise their rental.

But Chow is not quite the bona fide exorcist he claims; instead using Big Bust’s overriding fears to trick her into bed. But once a fatal accident befalls him on-set, the steadily nervous young thespian fears she may being facing a greater force than she expected. Kiki, a devout Christian, is fiercely sceptical of the existence of ghosts, even if friend Chak (Chapman To) is quick to offer his alleged Taoist services. With the creepy Aunt Nan harbouring a grisly secret, silently preparing herself for a ghost wedding, it will take the attentions of genuine spiritualist Chiu (Eric Wan), to unlock the secret and expel the malicious spirit in turn averting disaster for all.

Outside of notorious cult favourites ‘A Chinese Torture Chamber Story’ (1994) and ‘Underground Banker’ (1994), Bosco Lam never really emerged as a B-movie talent that left much of an impact on the Hong Kong cinema scene. His last production of note, for fans of low budget exploitation, was the Philippines lensed soft-core sex comedy ‘The Three Lustketeers’ (1998) which, whilst consistently amusing, was largely dismissed as bottom-tier cinema by the majority on release. On the flipside, Lam had proved a reliable assistant director amongst the Hong Kong mainstream with work on higher budget productions such as Ringo Lam’s ‘The Suspect’ (1998), Wong Jing’s ‘Conmen in Vegas’ (1999) and Andrew Lau and Corey Yuen’s ‘The Avenging Fist’ (2001). With the late nineties low budget and direct-to-video boom, under the wing of producer Lee Siu Kei (‘Indecent Woman’, 1999) Lam followed up his support work on Herman Yau’s ‘Troublesome Night 4’ (1998) with another foray into the horror genre, ‘House of the Damned’ (1999). Far from what one would class a major entry in the genre, ‘House’ is just silly enough to value itself as an amusing diversion.

Accordingly, one’s engagement with ‘House of the Damned’ ultimately lies within the individual’s tastes and/or reaction to what is, essentially, one long dirty joke masquerading as a horror film. The supernatural sexual assaults are approached from two distinctly different angles by Lam: either played for laughs with bad taste humour (as where an attack on Mak’s flatmate is mistaken for an exhibitionist episode of onanism) or as a vehicle to squeeze as much topless nudity into the film as the Category IIB classification will allow (Tony Miu’s camera has a propensity to zoom in on the actresses’ breasts in leering, lingering close-ups every opportunity it’s afforded). That said, with its comical, exaggerated tone Lam’s film is hardly as sinister as the undercurrents present in Kuei Chih Hung’s ‘Ghost Eyes’ (1974) or as garishly grotesque as David Lai’s ‘Possessed’ (1983). The only place it eventually unravels completely is the anti-climactic finale, which wraps up things a little too neatly and suddenly after all that has preceded it. Much akin to the Shaw Brothers films of old, once the narrative’s resolution has been achieved the credits pop up with jarring finality.

Inherently, ‘House of the Damned’ is just another of the numerous B-grade horror entries that emerged from the late-nineties, albeit sexed up with lashings of gratuitous nudity and as loud, crude and unruly as any of its peers. Yet it’s not without some reserved charm, or amusement factor, and the adventurous that can see past its signature bad taste motif should find a modicum of entertainment within its lowbrow aspirations.