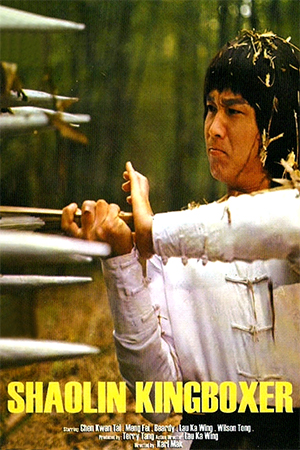 Karl Maka – who would go on to be one of the brains behind the 80s institution that was Cinema City film studio – directs this classy old school kung-fu film which recalls Sergio Leone’s ‘For A Few Dollars More’.

When a notorious gang chief is broken out of prison by a newly-formed team of villains, his first appointment is at the address of the lawman who put him behind bars. Although the police captain fights off his old foe though, he is left maimed and is forced to watch as his wife and child are killed in front of him. He subsequently goes into isolation as his nemesis begins to exert his control on the town. As time passes though and the gang chief begins to plan a massively profitable heist, the former lawman returns, complete with false iron hand, and finds his investigations helped (and occasionally hindered by) a cocky stranger with his own hidden motives.

I remember buying ‘Iron Fists’ (or ‘Shaolin Kingboxer’ as it was known) during the VHS days, bravely risking a few pounds on a film that had one of the worst covers for any movie ever (a black cover with a fist breaking through a door – the image has long since scarred my mind). Thankfully, the film turned out to be something of a minor classic, combining an exciting narrative with a superb cast and impressive choreography. Having reacquainted myself with ‘Iron Fists’ recently, I can confirm that my impressions were not merely the clouded opinions of an Oriental movie-loving youth.

From the way the first five minutes are shot, it is obvious that this is a cut above to usual fare; shot with style rather than just workmanlike efficiency, it is soon apparent that the makers have aspirations far beyond the standard pot-boiler. There is consideration given to the framing of the action, the character development and the sub-plots that splinter off the main storyline – all virtues which are expected of films from the major studios, but are often sacrificed for mindless action with many independent efforts of the time. As the characters are well enough defined, the fight scenes are given an extra frisson, building towards a suitably hectic finale.

‘Iron Fists’ is packed with varied action, good performances from luminaries like Chen Kuan-Tai and Mang Fei and is constructed in a way that does no shame to its lofty inspiration. In dire need of a remastered print though!