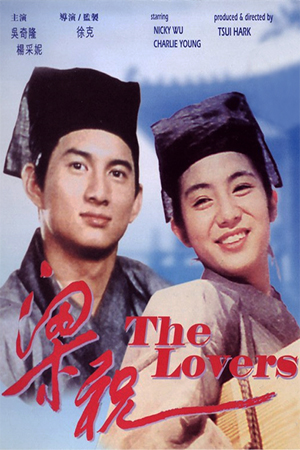 Tsui Hark, a director who has managed to infuse most of his work with his own original spark, turns his attention to a classical Chinese Opera that focuses on the doomed love of the eponymous ‘Lovers’. Of course, the aforementioned spark and renowned visual opulence are clearly present throughout.

Although her wealthy and socially ambitious family are arranging her marriage, Chuk Ying Toi’s (Yeung) general lack of academic savvy persuades them to send her to college first. Her mother reveals that she too went to college for an education in the past, but had to go disguised as a young man to pass through the stringent rules. Chuk’s parents therefore put the marriage on hold and send their daughter to one of China’s finest schools of learning to refine her intellect. Soon after arriving, Chuk meets one of the head teachers who instantly notices her secret and takes the young student under her wing. This means that Chuk sleeps in the library, away from the male students, and continues to keep her real identity a secret. While sleeping one night in her impromptu bedroom, she meets eager scholar Leung Saan Ang (Wu) and quickly forms a firm friendship with him. Over the next few months the pair go through thick and thin together with Leung still blissfully unaware of his best friend’s secret persona. However, after spending a night trapped in a cave together, Leung discovers who Chuk really is and then falls in love with her soon after. Unfortunately for the lovers, Chuk’s arranged marriage is looming and her parents do not take kindly to her stubborn resistance to the upcoming wedding. The parents decide to stamp their authority on the proceedings and forbid the lovers to meet, therefore testing the strength of their resolve.

It’s not necessary to be familiar with the original Chinese Opera to appreciate ‘The Lovers’; it operates in much the same way as many bittersweet Hong Kong love stories do. However, it is important to understand the way that such films vary tone and content so frequently within their duration. ‘The Lovers’ is no exception, the first hour being devoted to a fairly light-hearted atmosphere while the final forty minutes gradually turn tragic. It is this final section that proves to be the main reason for watching ‘The Lovers’ though as the previous sixty minutes fail to engage the viewer in the way they should. The development of the actual love between Chuk and Leung is given very little time and thus lacks some overall cohesion. Visually though, Tsui Hark continues to paint strong cinematic pictures with his liberal use of inventive filtered lighting and superb cinematography. Charlie Yeung also proves to be a major asset to the production, offering up a spellbinding performance that is another reminder of why Hong Kong cinema desperately needs her return to the screen.

Despite ‘The Lovers’ undoubted quality, it proves to be short of the magic that it often hints at. Parts of this film therefore prove to be greater than it as a whole.