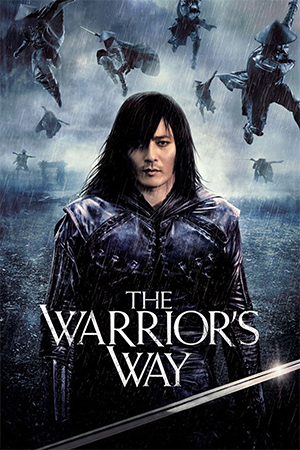 This East meets West genre mash up is heavy on the CGI and comic book styling and light in the story department but despite some shortcomings is actually an entertaining blast of muddled genres and slow-mo action. Yang (Dong Gun) is your typical badass swordsman/assassin who on the verge of annihilating his rival clan has a change of heart and vanishes with the surviving baby heir to said rival clan. Escaping the clutches of his pursuing clan, he holes up in the American Wild West in a broken down desert town. There he begins a new life, raising the baby, running a laundry business (!), making friends with a local cutie (Bosworth) and basically enjoying a life he never got to embrace. But as a man who has slaughtered so many, a clan who will not give up until they find him and a bothersome Colonel (Huston) and his gang of regulators constantly causing grief for the town, it’s not long before Yang has to take up the life of a killer once again.

A western, samurai, comic book, video game, ‘The Warrior’s Way’ is marred by this muddled mix of genres and styles. While the story plays out in predictable fashion the cast is solid enough helping us viewers to invest in the troubled hero’s plight. However, the sudden change in tone and style means the film is never consistent in its intentions and while it is overall entertaining, ‘The Warrior’s Way’ feels let down by a it’s own creative intentions. The combination of Western and Samurai works well, slick ninja warriors and steam-punk style cowboys sitting perfectly alongside one another giving the film its own unique feel. Unfortunately the decision to shoot much of the film on sets (impressive as they are) against green screen and have many of the action scenes play out in slow motion with heavy reliance on CGI robs this gothic samurai western of the tension and mood it so desperately needs. The action, when it comes in the final third, often feels diluted and with no sense of threat as the film switches to unnecessary slow motion and CGI. When are filmmakers going to realise that slow motion shots of CGI bullets and daggers cutting through the air are not cool and are not a sufficient substitute for actors and stuntmen actually engaging in choreographed combat?

Despite these grumbles, ‘The Warrior’s Way’ is still an entertaining oddity. The cast do well and it’s nice to see a film building to the action rather than bludgeoning the viewer with it every ten minutes. While there is a lot of CGI enhanced action, the final does build to an impressive barrage of violence (the film not holding back on the blood and slayings) and Danny Huston is positively vile as the twisted cowboy Colonel who gets many of the film’s best scenes and lines. His fight with Kate Bosworth is also the highlight: nicely shot and cut so we can see what is happening and devoid of any CGI. Korean actor Jang Dong Gun (‘Typhoon’, ‘My Way’) does well as the Clint Eastwood like leading man and it’s always a delight to see ‘A Better Tomorrow’ legend Ti Lung in anything.

A film that will probably divide most viewers, may be too lacking in action for hardcore samurai fans and is certainly flawed by its (ugh) video game style fight scenes, ‘The Warrior’s Way’ still has plenty to offer, often looks beautiful and is very enjoyable taken on its own terms.