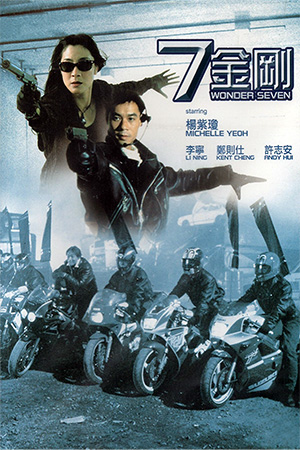 Crazy action high-jinks abound in the silly, dated but admittedly (for the most part) fun ‘Wonder Seven’.  The wondrous seven are a group of motorcycle-riding do-gooders who ride around Hong Kong saving the day. All being orphans they’ve formed a tight-knit family unit that are experts at kicking ass, causing vehicular mayhem and generally saving the day. They face their toughest challenge when they come up against a gang of dangerous thieves led, in part, by Michelle Yeoh. But when she starts to develop feelings for lead hero Jeffrey (Li Ning) she decides to switch sides leading to all out war between the two groups.

Plot is fairly thin on the ground here and what there is doesn’t always make a lot of sense as this flick is basically a showcase for some silly shenanigans from the main cast and a platform for Ching Siu-Tung to stage some impressive and crazy action. No stranger to orchestrating elaborate action scenes, having directed and/or action coordinated the likes of ‘Swordsman 2’ and ‘Curse of the Golden Flower’, he crams proceedings with some stylish pre-CGI stunt filled action. Comic book in tone with lots of high flying wirework the action is certainly over-the-top but always creative and energetic. Highlights include the opening salvo of the Wonder 7 completing their previous mission with lots of motorcycle stunts, a neat sequence involving a dragon parade and the crazy stunt filled finale featuring a helicopter and a skyscraper!

Alas, the rest of the film isn’t as fun as the action. Too much silly tomfoolery from the crew clogs up proceedings and grates after a while (and seems to involve every character falling into the sea at some point!), the supposed romance between Yeoh and Ning is flat rather than fiery and the rest of the Wonder 7 (including the likes of Andy Hui, Hilary Tsui and Xiong Xin-Xin) never really get a chance to shine. Ching Siu-Tung and Michelle Yeoh have certainly made better films but whenever the latter is on screen things improve greatly and while it’s no great shakes (and gets an extra star for the stylish action and presence of Yeoh) ‘Wonder Seven’ will provide some nostalgia tinged enjoyment for those who miss the golden days of stunt filled Hong Kong action cinema.