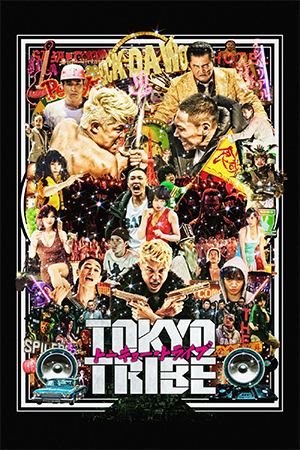 Good ole Sion Sono refusing to be pigeonholed, expressing his artistic urges to full tilt insaneness, making sure there is no way his new film/experiment/artistic splurge can be classed as mainstream. Well, he’s achieved this once again with the truly eye searing, ear assaulting, hip hop odyssey that is ‘Tokyo Tribe’. This two bit reviewer does enjoy Sono’s work (‘Suicide Club’, ‘Love Exposure’) though the director, working at the heights and rate he is, is going have a few misses in amongst all the excessive creative expression (‘Himizu’) but ‘Tokyo Tribe’ is the director on full expressive mode fusing hip hop, martial arts and an alternative Japan gone mad into a truly original whole. To boil it all down: there a bunch of gangs who have their own territory and all (mostly) converse through hip-hop rhyme. The (sort of) big cheese of all these gangs is Buppa (Riki Takeuchi) a maniacal, perverse, gold suit wearing lunatic who enlists the expert killing talents of the equally unhinged Mera (Ryohei Suzuki). The two hatch a plan to set up the leader of a rival gang and spark a gang war between all the other gangs. Things, naturally, don’t go according to plan: the other gang’s instead uniting with one another and going after Buppa and Mera.

Add in a pair of kung fu street urchins, another pair of martial arts assassins, a shit ton of perversion and general weirdness and another shit ton of hip hop rhymes and you have ‘Tokyo Tribe’. Rather than trying to describe Sono’s new joint, it’s best just to experience it. Don’t be put off by the fact most of the film is in rap verse, performed by many of Japan’s current hip hop artists, as after ten minutes or so it all makes sense (sort of) and Sono is at least thoughtful enough to give the viewer a lengthy introduction describing who all the gangs are and what the hell is going on (sort of). Coupled with some eye catching production design, impressive camerawork (the camera just seems to float in and around events and people, as if we the viewers are privy to the events unfolding!) and a run time that is for once mercifully under two hours, ‘Tokyo Tribe’ is a truly distinctive experience.

Sono can’t quite get away from his love of all things perverted which often clogs up proceedings and even threatens to derail them on occasion. Sure he’s (once again) poking fun at the sexually deviant side of Japanese society but proceedings sometimes slip from hip hop gang warfare epic to unnecessary sex farce. Still, this leaning to all things perverse does give the film an ace bad guy in the form of the truly (sexually) demented Buppa. Played with full on madness by Riki Takeuchi (‘Dead or Alive’, ‘Big Man Japan’) he veers from pervy pantomime villain to towering threatening madman with considerable ease and conviction.

Yet it’s the film’s distinguishing style and hip hop embracing way (not to mention a surfeit of nicely choreographed fight scenes) that sells ‘Tokyo Tribe’. Even if you aren’t a hip hop fan, the raps the committed cast spin keep the viewer engaged and the weirdness of events stay just the right side of crazy making ‘Tokyo Tribe’ a one of its kind trip worth taking. The festival crowd/lovers of non-mainstream cinema will no doubt lap it up but those looking for something a bit different (and an intro to Sono’s work) should give this (and as said by the elderly woman DJ who pops up throughout the film!) trip-from-the-ass-end- of-hell a spin.