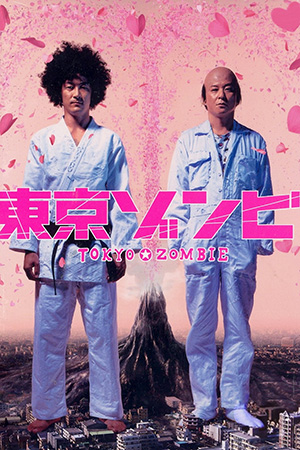 Zombie comedies are a dime a dozen these days but Sakichi Sato’s ‘Tokyo Zombie’ provides just enough quirk, laughs and something a little bit different to make it worth a look. Veering much more towards comedy than horror, the film sees two happy-go-lucky and ju-jitsu obsessed factory workers, Fujio (Asano) and Mitsuo (Aikawa), having to deal with a sudden zombie outbreak that ultimately sends the world (or Japan at least!) into post-apocalyptic chaos. Hitting the road, when the mountain of rubbish next to their factory (known as Black Fuji) starts raising the dead bodies buried there (it being a popular place for local residents to bury bodies: both dead and alive!), Fujio and Mitsuo must find means to survive. This mainly involves dodging various slow moving zombies, foraging for food and keeping up with their ju-jitsu training. Mitsuo is a master ju-jitsu practitioner and is determined to train Fujio in the art, which is just as well as Fujio soon finds himself in a newly built compound for the rich where he must fight zombies to the death for their entertainment.

To say ‘Tokyo Zombie’ is an oddball comedy is an understatement. Quite possibly the most laid back zombie apocalypse comedy out there, Sakichi Sato’s film is very much about the charmingly funny bond between the two leads. Well, for the first forty five minutes at least. Asano and Aikawa share an infectious chemistry which helps make ‘Tokyo Zombie’ so entertaining: Aikawa’s Mitsuo being like a wise father figure to Asano’s bumbling but sweet Fujio. Whether it’s Mitsuo attempting to teach Fujio the finer points of ju-jitsu, or the two of them dodging and decapitating zombies or Fujio just simply buggering up everything he does (the bit with the search for car keys or the food run in the abandoned supermarket being two hilarious highlights) these two are often very funny. While there is a lot of mad-cap shenanigans going on it’s the laid back (almost slow) pace that means the comedy quietly  unfurls, creeping up on you meaning that while what is happening on screen if often weird and downright bonkers it’s also very, very funny. Asano and Aikawa make a likable double act and much of the comedy comes from Mitsuo’s exasperation with Fujio’s ineptitude with, well, pretty much everything.

Unfortunately, though not disastrously, around the halfway mark Sato switches focus splitting the two characters up and hurtling the story 5 years ahead (by means of a nifty anime sequence). Fujio is now competing in some weird zombie gladiatorial games and also has a nagging wife and a mute child to contend with. While there is no doubt much to be drawn from the society has descended in madness angle and the rich will always prosper aspect, the second half of the film is just not as much fun as the first half. It’s certainly a novel and creative tangent the story takes and there is still plenty of zombie nonsense but one does come to miss the banter and chemistry between Fujio and Mitsuo. The film also starts to drag and is perhaps fifteen minutes too long with Sato getting to the point where he doesn’t really know how to end the film, tagging on several silly endings: just end the film already! While this viewer certainly found the film funny and guffawed out loud on several occasions, the humour may not be for everyone with the film throwing in all kinds of deviant acts and weirdness’s: not least in the opening act which may be a little jarring to those expecting a straightforward couple-of-dudes-fight-off-hordes-of-zombies kind of film.

Still, with its commitment to kookiness, likeable leads and a neat visual style which plays up its Manga roots, ‘Tokyo Zombie’ is more hit than miss in the comedy stakes and a welcome, and very Japanese, addition to the ever burgeoning zombie comedy genre.