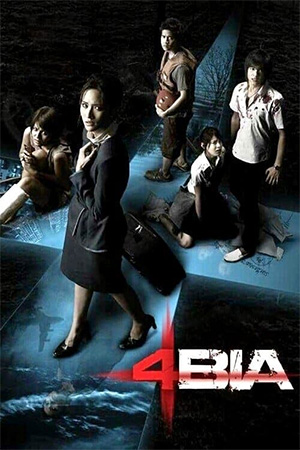 Anthology horror gets the Thai treatment in this nifty, four story feature from some of Thailand’s top filmmakers. As with any horror anthology, the stories/segments can be hit and miss and ‘4bia’ is no different. With four tales to tell, some are inevitably better than others, tension not always holding throughout the course of the entire film. Still each segment is unique in its storytelling, style and execution meaning each tale is short, sharp and in most cases, sweet.

The film kicks off with perhaps the best segment, ‘Happiness’. Writer/director Yongyoot Thkongtoon weaves an eerily effective and claustrophobic tale of a young girl holed up in her tiny apartment being tormented by a mysterious tormentor by text message and picture messaging. Now texting might not seem that scary but is given creepy credence thanks to some assured direction and the makers making great use of the heroine feeling trapped. The segment also plays on our reliance on phones and texting for company and how we will often forgo certain social safety protocols just to have the excitement of someone texting us; even if we don’t know who is on the other end of the line. With its effective use of no dialogue, one setting and tension, ‘Happiness’ is an excellent example of short story horror.

Segment 2, ‘Tit for Tat’, is almost as good and rockets along at a face pace with frequent lashings of gore. A gang of high school bullies get their comeuppance when they pick on, and ultimately kill, a kid who just happens to be dabbling in the dark arts. Cursing the group, he dispatches them in novel, ‘Final Destination’ style ways from beyond the grave. Again, short, sweet and fast moving, this segment ups the gore and despite some ropey CGI conjures up all sorts of freaky imagery, making it the most hardcore horror of the segments. Unfortunately it is marred somewhat by too much shaky camerawork and unnecessary quick fire editing which kind of kills all the tension.

Next is ‘In the Middle’, which is perhaps the weakest of the lot as it goes the comedy horror route. Unfortunately it isn’t very funny, the four male characters just annoying rather than humorous and the attempts at self-referential horror just embarrassing rather than funny. The film also drags on too long and the final pay off is a bit of a damp squib. This is surprising as this segment comes from the team behind ace Thai horror, ‘Shutter’ (one of the movies they poke fun at in this segment), but none of the skill or terror seen in that film is on display here. Shame.

Still things pick up for the final story, which sees a stewardess being terrorized by the dead body of a recently deceased member of royalty. Said stewardess just happened to be having an affair with the deceased’s husband, and all alone on the plane with the dead body, the deceased seems to be reaching from beyond the grave to extract some revenge. Silly but creepily effective, ‘Last Flight’ is another fun example of anthology horror that plays on the possible madness of the main character, suggesting it might all be in her head. Or, maybe not.