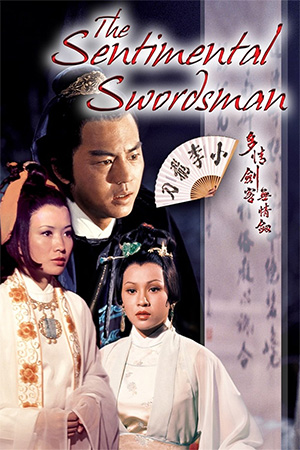 Due to his own extreme ideals, famed swordsman Li (Lung) has lost everyone dear to him. After his life is saved by a rival swordsman, Li’s overwhelming pride means he forsakes the woman he loves and lets her marry his saviour. Now resigned to travelling the country with his loyal aide (Fan Mei Sheng), Li’s only comfort is alcohol and the simple life he has now accepted. On one such journey, the lonely swordsman befriends the exceptionally skilled, yet secretive Fei (Yee) who has his own pressures to contend with. Li then finds himself embroiled in a battle to own the highly-prized ‘gold armour shirt’ – a protective vest that can withstand any blow. As he discovers that many of the people he meets have a hidden agenda, Li realises that Fei is the only man he can truly trust. This new friendship is put under test when the ‘sentimental swordsman’ is hunted down by numerous hired killers and framed for a series of crimes he didn’t commit. The person behind Li’s troubles proves to be elusive, though all the clues seem to point to the legendary ‘Plum Blossom Bandit’, a disguised figure whose identity has long proved elusive to the martial world.

Despite my oft-mentioned misgivings about the convolutions of these Gu Long adaptations, I must admit to having acquired a taste for the fruitful partnership of Long and Chor Yuen. Of course, if you’ve seen a few of these productions, you soon begin to become accustomed to the complexities and insanities of the storylines.  ‘The Sentimental Swordsman’ is more of a straight-forward swordplay epic than many of its forerunners and this is no bad thing. Make no mistake, there’s still enough intrigue and subterfuge to please even he hardiest Chor Yuen fan, but ‘The Sentimental Swordsman’ is refreshingly insistent on strong characterisation and introspection.

Ti Lung, as flawed hero Li, shows another facet of his thespian abilities. In ‘Clans Of Intrigue’ he played a cheery adventurer, ‘Swordsman And The Enchantress’ saw him as a cool and calm drifter while ‘The Magic Blade’ gave him the opportunity to be menacing and flippant as a master swordsman. Li, however, is a character who is better fleshed out than previous ones; although the audience is initially told little about him, the tragedy of his actions gradually reveal themselves. Ti Lung is adept at showing the inner-turmoil of a hero who has sacrificed everything for his misplaced principles – an action that becomes all the more resonant as the film progresses. As Lung showed in this post-‘Shaws’ years, his understated aptitude to display happiness, loneliness, heartbreak and menace makes him stand out from many of his fellow actors.

While many other Chor Yuen films have pinned their twists and double-crosses to one over-riding storyline, ‘The Sentimental Swordsman’ is slightly more loose in construction. The initial quest for the armour soon becomes a McGuffin and Chor Yuen gradually opens up the real themes of his work: revenge, retribution and the need for redemption. Though there a less obstacles to the theme than in many Gu Long adaptations, ‘The Sentimental Swordsman’ still has a few too many eccentric characters and double-crosses to achieve its goals. It therefore shares a problem that is apparent with other productions of this ilk; there’s an infuriating amount of fights bursting forth that simply stem from silly misunderstandings – you almost wish they’d take a breather for a minute so they can actually explain the situation properly. It can therefore appear repetitive to those new to the genre.

‘The Sentimental Swordsman’ is nonetheless a swordplay drama that is well acted and never less than entertaining. Chor Yuen is once again painstaking in his vision of the visual ambience of the martial world, while he also gets fine performances out of his cast. Tang Chia’s choreography is slightly more grounded in reality, with less of the superhuman traits and more of the straight-forward. Aspects like this make ‘The Sentimental Swordsman’ one of the most mature Gu Long adaptations under the Shaws banner, neatly giving the viewer a few characters who are written well enough to ensure that they escape the trap of stereotyping. It is qualities like this that make it an easier film to appreciate than many of the other Gu Long/Chor Yuen/Ti Lung efforts.