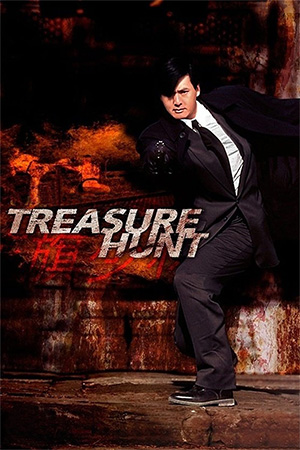 This fun, frothy and occasionally full on violent concoction mashes so many genres together its surprising ‘Treasure Hunt’ turned out this well made, coherent and well, entertaining. Made after the likes of ‘The Killer’ and ‘Hard Boiled’ brought Chow Yun-Fat international recognition and before he headed West to make his Hollywood debut, this lightweight action flick is more fairytale comedy than gun blazing action but manages to blend all it’s genres and influences to make it a thoroughly enjoyable (and somewhat underrated) romp. We have comedy, paranormal shenanigans, gunplay, romance, and even a little martial arts as CIA agent Chow Yun Fat heads off into mainland China to go undercover in a Shaolin monastery to retrieve a valuable treasure and transport it back to the USA. After much comedy mugging, butting heads with the head monk (the great Gordon Liu) and befriending the comedy fat kid, Yun-Fat discovers a mysterious woman (Chien-lien) housed within the monastery. It doesn’t take long for him to fall for this beauty but with her supernatural powers very evident it’s also not long before he realises she is the “treasure” he’s be sent to protect: a treasure many nefarious forces are determined to get their hands on.

Hardcore Hong Kong cinema/ Yun-Fat /action fans may be a little disappointed that the film spends a lot more time on the romance between the leads and Yun-Fat’s budding friendships with the monks than it does on lots of ballistic action. But this matters not as ‘Treasure Hunt’ has no intentions of being the next ‘Hard Boiled’. As mentioned, the mixing of genres works surprising well and the less frenetic pace and the focus on the fairytale-like aspect of the film makes ‘Treasure Hunt’ an energetic caper. Yun-Fat is his usual charismatic self (despite playing somewhat of an arrogant douche) and seems to be relishing playing a more lightweight role. Wu Chien-lien is cute as the paranormally possessed Mei, Gordon Liu provides some suitably antagonistic resistance to Yun-Fat’s CIA agent, Philip Kwok is on hand for some comedy banter and fight action and, hell, even the shoe-horned in kid isn’t that bad (and even provides much of the comedy). Despite being often a little too broad (and loud) the comedy is often funny with many a laugh out loud moment and the romance is gentle rather than overly mushy.

As is expected with so many genres rammed together the tone can be somewhat jarring, especially when the flick erupts into action or sudden violence. The opening shotgun blasting action scene is rather brutal, there is a scene of perhaps a-little-too-stern punishment for our kid hero and the finale has all kinds of bloody bullet riddled and bad guys being set on fire death going on. However, director Jeffrey Lau (‘Thunder Cops’) manages to keep everything on track and there is something comforting and nostalgic about this type of film as we get a bit of comedy, a bit of romance, a bit of drama and a bit of action: meaning all bases are covered. Coupled with a few decent action scenes, including a wicked staff fight between Kwok and Liu and some stunning photography from ace Hong Kong cinematographer Peter Pau (‘Crouching Tiger, Hidden Dragon’), ‘Treasure Hunt’ is a fun, old school frolic starring one of Hong Kong’s biggest stars.