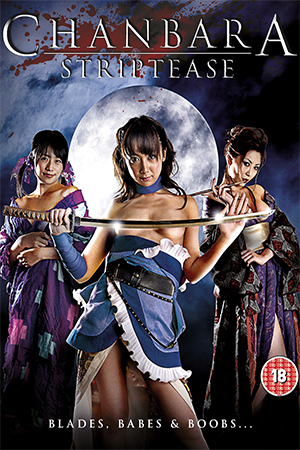 Topless swordfighting. That’s basically what this film is about. Pretty women, dressed as Samurai’s, baring their breasts and engaging in swordplay. That’s it, in a nutshell. That’s all really one needs to know as that is really why one is going to be watching this film. I could really just end the review here, as this paragraph contains all the essential things you need to know about ‘Chanbara Striptease’: topless swordfighting.

Despite its exploitation roots and dubious moral stance at hinging a film around topless women fighting, ‘Chanbara Striptease’ is actually a fun, cheeky slice of titillation. Just when you think cult Japanese cinema couldn’t get any sillier, director Akira Hirose takes his simple, nudity based premise and runs with it. On her twentieth birthday, Lili (Sasa Hanada) is the recipient of a rare form of martial arts called Sayama Hashinryu: which, as already mentioned, is basically the ancient form of Samurai performed topless. Then for reasons too inexplicable to go into here (but which fit perfectly well within the barmy parameters of this film) Lili is sent back in time 300 years to protect a village from some nasty ninjas and another breast baring fighting women. From then on in, it’s pink glowing breasts a go-go.

Really there is no point in critically anaylsing a film like this. It’s all about fun and ‘Chanbara Striptease’ is actually a lot of fun. Extremely low of budget, it has a kind of bawdy sense of humour, frequent displays of boobage and many naff but copious of bare breast fight scenes. The film mercifully stays the right side of sleazy, much of the nudity and sex played for titillation and it makes a nice change to see a crazy, kooky, cult Japanese flick lay off the heavy gore and splatter for a change. Don’t go expecting something along the lines of ‘Tokyo Gore Police’ or ‘Robogeisha’.

Ok to sum up: ‘Chanbara Striptease’ is about topless women fighting with swords of which it has many scenes of, so if you want to see such a thing, then watch this film.