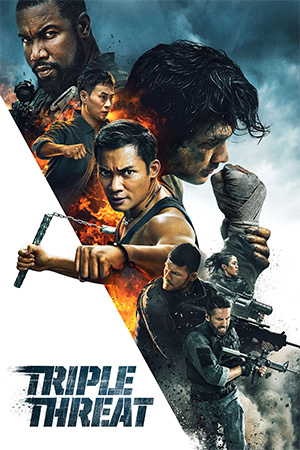 Fast and fun ensemble action flick puts some of the best fight stars front and centre for an action blast straight out of the 1990s. A trio of some of the best Eastern screen fighters (Jaa, Chan, Uwais) lead an impressive action cast as the they unite to take down an evil Scott Adkins and his crew of bad assess. The crew have double crossed Jaa and Chen, slain Uwais’ wife and are now attempting to complete a contract to kill a dodgy billionaire’s (is there any other kind?!) daughter (Jade), who is about to bring down a powerful crime syndicate. Through much action movie convolution, the three heroes must protect the whistle blower, all the while fending off relentless attacks from the crew who want her dead.

Director Jesse Johnson continues his hot streak of action hits, once again reuniting with Adkins, and bringing along some of the best action talent going. Adkins takes more of back seat here (though is still ace as the snarling bad guy), with Jaa, Chan and Uwais the real stars all getting to put their considerable fight talent to impressive use. They get to fight pretty much everyone at some point during the course of the film with highlights being Uwais fighting ‘Chocolate’ star Jeeja Yanin and a great one-on-one with Michael Jai White; Jaa taking on ‘Who Am I?’ Fight star Ron Smoorenburg and going toe-to-toe with Adkins in the full on finale; and Chen getting to shine by going boot-to-boot and fist-to-fist with UFC star Michael Bisping. There is so much fighting in this flick everyone gets a chance to strut and Johnson also packs a fair amount of fierce firepower and dangerous stunts, meaning the flick certainly delivers the action the impressive cast promises.

As it is such a large cast of action stars, not everyone gets substantial screen time and the narrative does buckle occasionally in trying to keep them all crossing paths in order to fight one another. There is rarely a break between the action, meaning the story evolves from one run-and-gun-battle to the next but this not really an issue, as no doubt we’re all here to see these guys and gals kick ass. Jaa and Chen share good buddy chemistry (they should get their own spin-off flick!) while Uwais does more of the heavy lifting dramatic wise, as he’s out to avenge the death of his wife. The guy has chops in the acting department as well as the action one. Adkins appears to be having a hoot as the thoroughly bad, bad guy and his team (Jai White, Bisping, Yanin, Smoorenburg) make for worthy boo-hiss adversaries.

Not quite as satisfying as Johnson’s other recent hits ‘Accident Man’ and ‘The Debt Collector’ but nevertheless an action soaked hoot showcasing some of the best screen fighters around.