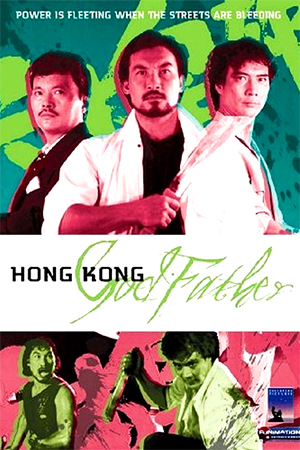 ‘Hong Kong Godfather’ is proto-heroic bloodshed, with big knives instead of .45s. Coming at the end of the Shaw Brothers factory line of films this film, along with Kirk Wong’s ‘The Club’ marked a turning point from the New Wave inflected crime movies such as Ann Hui’s ‘Story Of Woo Viet’ to the stylish carnage of later cops and triad flicks by John Woo and Ringo Lam. Little in the way of social commentary here, more tattoos and midnight noodle parlours.

‘Hong Kong Godfather’ tells the simple, bloody story of a gangster, played by Leung Kar Yan, attempting to go straight, raising his daughter after the death of his wife but finds himself drawn back into the Triad fold after his Big Brother gets done in by a traitor. Yes, it has been done a million times since the dawn of the gangster movie, Asian or otherwise. But a Hong Kong film fan usually does not look for bold filmmaking, they are content with thrills mostly. Quite rightly I say.

This film’s strength lies in its joy in beating you over the head with excessive 80s bloodshed and cheese. The cheese is present in the angular haircuts and garish clothing, along with mobile phones that are as large as a period ghetto blaster. The bloodshed is a gangster spin on ‘Boxer From Shantung’. There are moments where the screen and cast are drenched in red paint, limbs literally fly and glass is shattered to an extent that Jackie Chan was probably worried about the reputation of ‘Police Story’.

The finale is a masterpiece in frenzied fight choreography, a mixture of martial arts and chopper action. Leung Kar Yan and his compatriots storm the baddies lair to do damage to all within. Unlike the rather toothless confrontations of the Young Punk movies such as ‘Young And Dangerous’, ‘Hong Kong Godfather’ offers up triad battles that look as if they actually end in injury and death. Look to the cartoonish excess of the recent Jordan Chan vehicle ‘Hong Kong Bronx’ as an example of how to mess up a gangster film, ‘Hong Kong Godfather’ keeps it straight and simple, offering bloody thrills with a cast and crew honed on kung fu movies smashing their way into the gangster arena.

Writer, director and action man Johnny Wang filmed several movies between 1985 and 1992, this being the best. His best known film is probably ‘Angry Ranger’ or amongst the softcore fiddler crowd the truly awful ‘Escape From Brothel’, a film which features nude kung fu. Enough said.

This is a fine film, very deserving of its release from Funimation, previously available solely as VHS ripped bootlegs it is now available in PURE Shawscope just as Run Run undoubtedly intended.