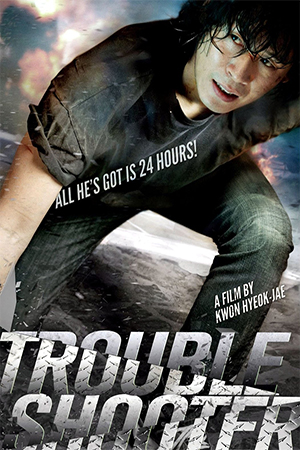 Kang Tae-Sik is a former detective who left the force under a dark cloud and now works as a private eye. On a routine call to a love motel to catch a philanderer on photograph, Kang discovers the dead body of a female psychiatrist and it dawns on him that he has been set up for the murder. A scrambled voice on his mobile phone tells him how to escape the on-coming horde of policemen, then informs him that if he wants to clear his name, he must do exactly as he’s told.

It transpires that Kang must kidnap a lawyer ready to give key evidence in a government enquiry. Using his well-honed fight skills to achieve this, the former policeman whisks away the odious witness and awaits instructions, only to gradually unravel a political cover-up that involves several corrupt Seoul detectives. Kang is now unable to trust anyone and finds his own life and that of his daughters to be at risk.

‘Troubleshooter’ has all of the pre-requisites for a modern thriller: snappy Bourne-style action with editing to match; conspiracies galore with the powers-that-be as avaricious as the gangsters they chase; no-nonsense hero he can defeat a small army unarmed. There is, therefore, no surprises in this Korean blockbuster. Yet the winning entertainment value that Kwon Hyeok-Jae imbues his film with renders all of these minor inconveniences mostly irrelevant.

The real enjoyment of this breathless action flick is its quicksilver pacing. Barely ten minutes into the film the main story is in full gear with further exposition added throughout. That infectious zip manages to last the full 100 minutes which is no mean feat considering how often genre films have great openings that subsequently peter away. The eventual revelations as to who is behind the conspiracy and why do feel a tad underdeveloped, but the viewer will be too busy being swept along by the tide to notice.

‘Rikidozan’ award-winning actor Sol Kyung-Gu is another ace in the director’s hand. Playing our reluctant hero Kang Tae-Sik, Sol has the right balance of hard-nosed effectiveness, dry wit and understated vulnerability. Director and star are so comfortable in what they do, it almost seems that this is another part in a long-running franchise. The thought of ‘Troubleshooter’ being the beginning of a series of films featuring Sol Kyung-Gu as private detective Kang Tae-Sik is potentially tantalising.