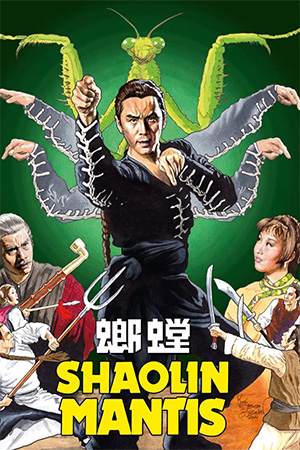 On paper, ‘Shaolin Mantis’ seems to have all of the vital ingredients of another Shaw Brothers’ classic. Primarily, there’s illustrious helmer Liu Chia-Liang as the film’s director and chief choreographer. Another asset is a leading man with a strong reputation behind him, David Chiang. Finally the general concept has obvious potential for a cast of ‘Shaolin Mantis’ stature.

The Manchu Emperor and his political aides suspect the prominent Chien family of being Ming patriots and therefore assign the task of investigating them to one of their top charges, Wei (Chiang). After proving his capabilities in a series of bouts and showing everyone that he is worthy of the task, Wei sets out the infiltrate the family. On arriving in town he seizes the opportunity to accept the position of teacher to the Chien’s spoilt daughter. Although she is known for making life unbearable for her previous instructors, Wei’s patience and wiles mean he lasts in the role and the two fall in love. While their relationship steadily continues he continues to probe into the dealings of the Chiens, in particular the father. When the secretive love of Wei and Chi Chi blossoms into marriage, the investigator discovers the full extent of his in-laws rebel sympathies and they in turn learn that he is a Manchu. What follows is a protracted battle between the newlyweds and their family with the promise that, if Wei can win against all of the skilled members, they can leave. The task is only achieved after tragic loss though and the inadequate abilities of Wei need to be improved before he can complete his mission.

Although ‘Shaolin Mantis’ is a well made and above average, it undoubtedly disappoints when compared with Liu Chia-Liang’s best work. There a few notable reasons for this. The storyline is a strong one with enough opportunity for expansion and characterisation. However, these chances to flesh out the concept and create a genre classic are missed; too many relationships here are presented without necessary depth, which is a surprise considering the pedigree of the director. The romance between Wei and Chi Chi, for instance, occurs with little explanation and the viewer is just asked to accept this on face value. As Chi Chi goes against her entire family for the man she loves, this element urgently needed realism to be accepted. ‘Shaolin Mantis’ flounders here though as it also does in sketching the other important players in the drama. The lengthy fight scene as Wei leaves the home is also too lengthy to have any resonance. Whereas Liu Chia-Liang usually knows how to balance drama and action, here the equilibrium is severely disrupted.

Even a so-so Liu Chia-Liang film is better than many other works and ‘Shaolin Mantis’ is obviously worth watching. David Chiang makes a good, though not remarkable, leading man and makes up for in charisma what he lacks in physical prowess. Without giving too much away, the film also boasts a superb twist ending that turns everything on its head. Moments like this linger in the memory long after the numerous disappointments fade away.