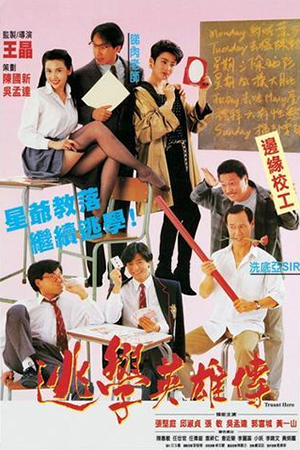 A  cowardly policeman (Cheung) is demoted after a particularly craven showing during a hostage negotiation and forced to go undercover as a teacher in a Hong Kong school. An unknown student has incriminating evidence about a Taiwanese kingpin and the reluctant hero needs to find it before a band of hired assassins do. As if his new assignment isn’t humiliating enough, he is also unceremoniously dumped by his beautiful, but domineering girlfriend Hing (Yau), leaving his already feeble dignity in shatters. The heartbroken cop finds the abrasive reality of school life difficult to adjust to and regularly has run-ins with local uber-idol Ace (Kwok), but when Hing is also sent into the school as an undercover student, things get progressively out of hand. Thankfully the haggard investigator is offered precious salve by an attractive fellow teacher (Man) who helps relate to his unruly charges.

Wong Jing is either a master of interpreting the zeitgeist of Hong Kong film-making or a petty plagiarist, but his ability to churn out an imitation of a popular hit while the cinema seats are still warm evokes a begrudging admiration. With an obvious zeal to cash-in on the smash hit ‘Fight Back To School’, Wong Jing presented audiences with ‘Truant Hero’ – a film that even press gangs many of the same cast members into service here.

There is a significant difference with this production though: there is actually some entertainment to be derived from ‘Truant Hero’ and it exists on its own strengths rather than being completely reliant on its influences. Much of the minor achievement is down to the exotic menagerie of characters on offer here; we have a gloriously dippy hero, the shrewish ex-girlfriend, an Aaron Kwok at his floppy-haired zenith and a villainous Yen Shi Kwan clearly inspired by his turn in ‘Once Upon A Time In China’. Add to this collection Chan Hui Man as an ex-triad forced to work at the school to work off his community service (a highly unlikely idea, but one that gives him a chance to lampoon his hard man image) and it’s impossible not to be charmed by this nutty spectacle.

As Chow Sing Chi was the pivot for ‘Fight Back To School’, the underrated Alfred Cheung is undoubtedly the star here. Like an elongated Ronnie Corbett, Cheung is perennially the dopey everyman thrust into situations he is ill-prepared for, retaining the same screen persona for pretty much every film he stars in. He may never be stretched as an actor, but that’s certainly not a criticism as Cheung has an enviable comic timing that ignites most of the films he appears in. One look at our gormless hero vying for Cheung Man’s affection while the oafish Chan Hui Man character mutters threats in the background is an obvious, yet delicious comic conceit. He’s also arguable a more sympathetic protagonist than Chow Sing Sing, the posturing hero of ‘Fight Back To School’.

As with much that Wong Jing touches though, ‘Truant Hero’ is not without its unrefined moments. The usual smattering of bad taste is present and, though it is thankfully subdued before it can completely take over, loses the film a 1/2 star overall. His need to take standard comedic set-ups and overblow them in a way that aggravates, shows a director who often lets such boring skills as restraint fall by the wayside. In the end, there’s enough quality in other areas to partially forgive these annoying Jingisms, but it grates nonetheless. If you can get past this, ‘Truant Hero’ is a comedy that exists in its own little cosmos, a place where an ungainly anti-hero as played by Alfred Cheung is the object of affection for two delectable actresses in the shape of Chingmy Yau and Cheung Man – it is very much a product of a certain country in a certain heady era.