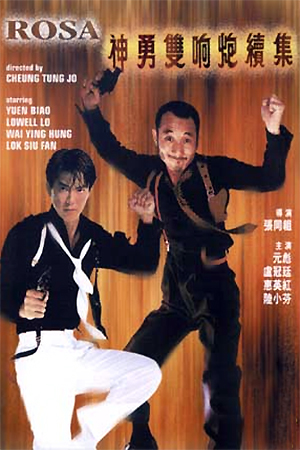 ‘Rosa’ is another of those simple, yet very enjoyable action comedies that Hong Kong seemed to produce with effortless ease in the 80’s. This period of Hong Kong cinema commanded a huge legion of fans worldwide due to the straight-forward directive that they seemed to operate by: to amuse, to excite, but most of all to entertain.

Yuen Biao and Lowell Lo play two police officers who are teamed up under the direction of a grumpy superior. Having both managed to get on their superior’s wrong side, the duo find that their assignments are of the undesirable kind and they’ve become the laughing stock of the force. Things seem to take a change for the better when they’re given the task of locating an important police informant who has damning evidence on a local villain, but has gone into hiding. Their only lead is the informant’s girlfriend – a model by the name of Rosa – who is still in contact with him. It doesn’t take very long for Lo to fall in love with Rosa and attempt to use his police persona to woe her; she, however, is far from impressed and not only refuses Lo’s help, but also avoids police protection. Matters take a more serious turn when Rosa realises the danger she’s in and is therefore forced to lodge with Lo, Biao and Lo’s sister (Hui Ying Hung). When the informant is killed and his information is passed on to Rosa, the villains find out her location and kidnap her and Lo’s sister, hoping to use them as bait for the two cops and get their hands on the incriminating evidence. With the women they love in danger, the resourceful pair make their way to their enemies’ hideout and attempt to bring them to justice.

While ‘Rosa’ isn’t one of the best action-comedies to come out of Hong Kong in the 80’s, it is still a constantly watchable one. The main emphasis of the film is comedy and this portion of the film is entertaining if unremarkable. Many prospective viewers will already know if this uniquely Hong Kong humour will appeal to them; if they have no interest in this harmless and fairly innocent style of humour, then ‘Rosa’ is best avoided, but for most it will make for a good 90 minutes. A film with Yuen Biao in usually demands some action and ‘Rosa’ supplies this with quality rather than quantity. His closing battle with Dick Wei is well worth waiting for as it features excellent choreography and a few interesting touches i.e. the brief continuation of the bout in a meat freezer. Although Yuen Biao is the main strength of the film, the supporting cast is full of regular Hong Kong actors that help level out the duration of the film and boost the sometimes flagging pace. ‘Rosa’ is not the best film Yuen Biao has made, but for his fans (myself included) it is a good addition to his list.